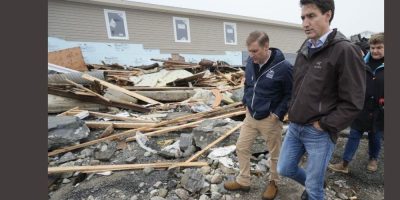 Justin Trudeau met Wednesday with some of the distraught residents of Port aux Basques, N.L., while getting a close look at yet another coastal town shattered on the weekend by post-tropical storm Fiona.

Against a backdrop of collapsed houses and heaps of smashed plywood and other soaked debris, the prime minister listened as some residents told of their harrowing encounters with a storm that produced a record-setting storm surge and shrieking winds that reached 140 kilometres per hour or more.

“I know that people will continue to work hard to get their lives back together and government will be there,” Trudeau said after his tour. “People are trying to get through one day at a time.”

Trudeau noted that Canadians have already donated $10 million in disaster relief to the Canadian Red Cross, and he confirmed Ottawa would match that dollar figure. He did not commit to any new funding, but Trudeau said his government would extend the GST filing deadline for affected companies.

“We know that with winter approaching, they’re going to need longer-term solutions,” he said, referring to communities across the East Coast left battered by Fiona. “That’s why the federal government will be there.”

On Tuesday, Trudeau travelled to Prince Edward Island and Nova Scotia to survey similar scenes, but the destruction in southwestern Newfoundland appears to be on a bigger scale.

Earlier in the day, the Newfoundland and Labrador government announced that residents who lost homes or property during Fiona can soon apply to a $30-million provincial relief program, but officials acknowledged that the funding likely won’t fully cover what is needed.

The province is open to making more money available as the true financial impact becomes clearer, Premier Andrew Furey told reporters at the town council office in Port aux Basques, where dozens of homes were destroyed by Saturday’s storm and one woman died after being swept into the sea.

“We understand that this may not touch everybody, but it’s an attempt to get money into people’s pockets who need it the most in this time of distress,” Furey said.

Residents must apply to the program through the Canadian Red Cross, and Furey said the funds will be available as early as Monday to help those who lack insurance or need swift assistance while their claims are being assessed. He encouraged people who slip through the cracks to contact a provincial helpline and explain their situation.

Meanwhile, residents of southwestern Newfoundland continued Wednesday to dig through the rubble of their former homes, anxiously awaiting information about whether insurance would cover their losses. Many are wondering where they will stay for the long term, after their homes were ripped from their foundations and in some cases washed away.

While the true number of displaced residents isn’t yet known, Furey said the province is aware of 75 displaced households in Port aux Basques and more than a dozen in surrounding communities.

Through the relief program, the government said $1,000 would be available for every household whose members were temporarily evacuated but are able to return home by Sept. 30. Displaced households whose members cannot return by Sept. 30 are eligible for $10,000.

Furey said $500,000 will go to the Red Cross to assist people with relocation and other personal needs. Another $500,000 will be split among affected communities. Any extra money will go toward rebuilding efforts, the premier added, though he noted that the work would take time and require co-ordination among levels of government and affected residents.

The rebuilding process will also take into consideration the likelihood of more frequent intense storms in the future, Furey said, as well as the wishes of many residents who are now fearful of rebuilding or moving back into homes so close to the coast.

Furey said he would like Trudeau to know that Ottawa “needs to be here with financial support” after the storm, which has been “devastating” for people on the southwest coast.

Canadian Armed Forces members were on the ground in Newfoundland Wednesday doing wellness checks and visiting some small coastal communities that have been isolated and without cellphone service since Saturday’s storm.

This report by The Canadian Press was first published Sept. 28, 2022.