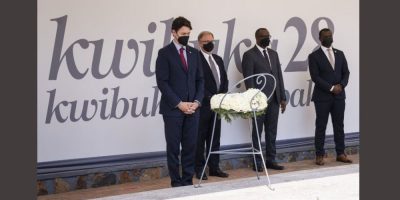 By Laura Osman in Kigali, Rwanda

Prime Minister Justin Trudeau announced $250 million in new food aid on Thursday and blamed the growing threat of starvation squarely on Russia as he prepared to meet with leaders whose nations are feeling the pangs of famine.

The prime minister is in Kigali, Rwanda, for a meeting of Commonwealth heads of government, where he hopes to rally support for Ukraine in its fight against the Russian invasion and provide assistance to combat the geopolitical fallout of the conflict.

Trudeau made a point of blaming Russia for the skyrocketing energy and food prices that have left millions of people in Africa and other parts of the world struggling to feed themselves.

The Commonwealth is made up of 54 independent countries with historic ties to the British Crown, which together represent about 2.5 billion people. They range from some of the richest economies in the world to some of the poorest.

Yet 10 of those countries abstained from a UN vote in March condemning Russia’s attack, and Trudeau sought to leverage the difficulty they are now facing in feeding their populations to boost international opposition to Moscow.

“Russia is responsible for the global food crisis we’re facing right now,” he said during a news conference on Thursday.

“The illegal invasion of Ukraine, the choice to bomb grain silos in Ukraine over the past couple of days, the continued blockade of the port of Odesa by Russian ships to prevent grain from getting out — to the Middle East, to Africa, to elsewhere around the world — are real preoccupations for all of us here.”

The new funding to address the food crisis is in addition to roughly $500 million that Canada has donated since January to help address food insecurity in the developing world.

As Trudeau seeks more allies to oppose Russia’s invasion, he also faces questions about his plans for raising concerns about the actions of some Commonwealth members — starting with the host country, Rwanda.

On Thursday, Trudeau became the first Canadian prime minister to visit the Kigali Genocide Memorial, which is the final resting place of more than 250,000 of the more than 800,000 Rwandans, including Tutsis, moderate Hutus and others, over 100 days.

The prime minister laid a wreath at one of the tombs and crossed himself as members of the Rwandan military stood guard and played a sombre melody on the bugle horn.

Contemporary concerns about human rights violations in Rwanda under President Paul Kagame have been raised for years. That has included the arrest and prosecution of opposition figures and dissenting bloggers and commentators.

Trudeau and Kagame, whose country abstained from the UN vote on Russia, attended a roundtable discussion on Thursday to discuss the impact of COVID-19 on businesses and plans to reinvigorate the global economy.

But a scheduled one-on-one meeting on Thursday was delayed.

Asked what he plans to say about Rwanda’s human rights record when he meets with Kagame, who has been in power since 2000, Trudeau suggested his focus would be on looking for ways in which Canada can help the country.

“We’re there to support each other and there to move the bar forward on human rights,” he said. “We will, of course, take careful looks in every conversation at the challenges facing various countries and look for ways that Canada can help.”

This is the first time Commonwealth Heads of Government have met in person since 2018. The 2020 summit, like most events, was postponed because of the COVID-19 pandemic.

Trudeau arrived in Kigali on Wednesday but the official welcome ceremony begins Friday. Leaders are expected to sit down for a series of closed-door meetings Friday and Saturday.

Many world leaders, including Trudeau and British Prime Minister Boris Johnson, attended a black-tie welcome reception and state dinner at the Kigali Convention Centre on Thursday evening, but others have opted to stay home.

Though most leaders arrived without one, Trudeau wore a mask as he walked through the corridor of the convention centre toward the reception. He tested positive for COVID-19 nearly two weeks ago.

Rwanda is the first stop in a three-country tour for Trudeau that will also include attending the G7 in Germany and a NATO summit in Spain, both of which will involve a heavy focus on Russia and Ukraine.

This report by The Canadian Press was first published June 23, 2022.