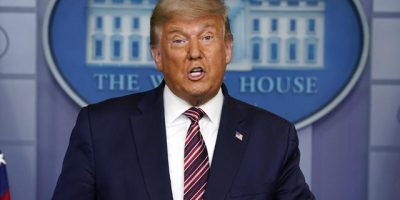 President Trump again falsely claimed victory in the presidential race on Thursday. At the same time, he accused his critics and the media of stealing the election from him in remarks riddled with inaccuracies and untruths.

Hundreds of thousands of legally cast votes have yet to be counted in several states, and there is not yet a winner in the race between Mr. Trump and Joe Biden.

Mr. Trump spoke Thursday evening from the White House, the first time that he has addressed the public since his remarks in the early hours of Wednesday morning after election night. His campaign has brought or threatened lawsuits in several closely contested states in an attempt to stop the the counting of votes it is disputing.

“If you count the legal votes, I easily win,” Mr. Trump said. This is incorrect, as votes remain to be counted, and Biden is leading the president in Electoral College votes. He also raised baseless concerns about the validity of absentee ballots, falsely saying that they “make people corrupt.” There is not any evidence of mail-in ballot fraud.

Mr. Trump said without evidence that Democrats are “trying to steal an election, they’re trying to rig an election.” He said that his campaign was bringing “tremendous litigation” in states where votes are still being counted.

Mr. Trump had previously falsely claimed victory in Pennsylvania, North Carolina, Georgia and Michigan, even though there are thousands of ballots that are still being counted. He has also sought to cast doubt on the outcome of the election in several posts on Twitter which have been flagged by the social media site for being “misleading.”

Mr. Trump also incorrectly said that he had won the election in his remarks on Wednesday morning at around 2:30 a.m.

Vice President Mike Pence tweeted shortly after Mr. Trump wrapped that he “stands” with the president. “We must count every LEGAL vote,” Pence wrote.

CBS News reports that Biden is leading in Arizona and Nevada. Although Mr. Trump is currently leading in Pennsylvania and Georgia, the states are now counting mail ballots.