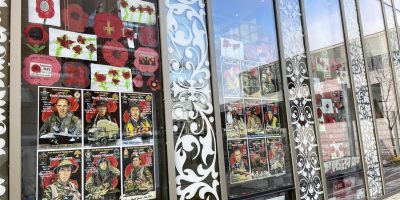 The pandemic has once again forced a change in how the Orillia Public Library (OPL) pays tribute to those locally who served Canada during wartime.

Pre-COVID, OPL community services coordinator Jayne Turvey would put on a grand display inside with war medals, uniforms and helmets, along with interactive displays. In 2019, over 800 students from Orillia-area schools came through the library in the weeks leading up to Remembrance Day.

This year, Turvey brought together young and old to help create displays that can be viewed in the main window of the library facing outside to the courtyard.

“We created some videos and pay books with little questions for the students to answer while they are watching the videos,” explained Turvey.

There is also a display of some uniforms, helmets, and signage referring to Orillia’s war history.

“We did have a connection to the War of 1812, for example, so we’re starting with that up to present-day soldiers,” said Turvey.

What most excites her is how the 100th anniversary of the poppy is being marked.

Students that would normally come to the library for indoor Remembrance Day events, as well as seniors and young people from the Orillia Youth Centre have created poppies for the window displays.

“We have five different nursing homes and retirement homes involved, and we have pictures of the seniors doing the poppies. They are excited to be in the spotlight.”

Turvey said the seniors knitted poppies, the youth from the youth centre painted rocks with poppies on them, and the younger students at the schools made paper plate poppies.

She said the exhibit has been well-received.

Turvey puts her heart and soul into these Remembrance Day projects.

In February 2019 she received the Angus Mowat Award of Excellence for her work on the library’s Remembrance Day exhibit.

Turvey also heads up a not-for-profit research project, honouring soldiers of The Royal Canadian Regiment of Canada who participated in the Dieppe Raid on August 19, 1942.

Turvey’s father was captured at Blue Beach, and because of that, she and her dad wrote a book together, and she learned about the story.

The OPL Remembrance Day exhibit is on display until Nov. 15.