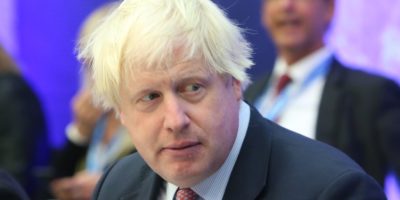 London — Prime Minister Boris Johnson’s office told British journalists Tuesday that reaching a Brexit deal with the European Union ahead of the upcoming October 31 deadline was “essentially impossible.” Johnson’s government was reacting to a call between him and German Chancellor Angela Merkel earlier in the day, during which Merkel reportedly said it was “overwhelmingly unlikely” any deal could be reached based on proposals Johnson sent to the EU last week.

The dire outlook presented by Johnson’s government sparked a war of words with European Council President Donald Tusk, who tweeted directly at the prime minister: “What’s at stake is not winning some stupid blame game. At stake is the future of Europe and the UK as well as the security and interests of our people. You don’t want a deal, you don’t want an extension, you don’t want to revoke, quo vadis?” (Quo vadis is Latin for “where are you going.”)

The U.K. is set to leave the EU on October 31, but legislation recently passed by Britain’s Parliament requires Prime Minister Johnson to ask Brussels for an extension if the House of Commons doesn’t endorse a deal or consent to a no-deal Brexit by October 19. It’s unclear whether Johnson’s government might be able to find a loophole in that legislation that would enable it to stick to his promise to pull Britain out of the EU, with or without a deal, on the 31st.

There was “skepticism” within EU circles over the U.K.’s description of Johnson’s call with Merkel, CBS News partner network BBC News reported. A spokesman for Merkel’s office declined to comment on confidential conversations.

Meanwhile on Tuesday, the U.K. government published a “No-Deal Readiness Report,” outlining preparations it has made in the event the U.K. does leave the EU without an agreement.

Previously leaked government documents laid out the possibility of medicine and food shortages in the U.K. should Britain leave with no deal, as well as potential civil unrest.

The plan published Tuesday detailed what the government has done to try and avoid those worst-case scenarios — many of which had been previously discussed. The “Readiness Report,” for example, notes the government has created a dedicated unit to support suppliers of medical goods in Britain, which could soon need to jump through additional hoops to ensure the integrity of  their supply chains.

“While we remain optimistic, we are also realistic about the need to plan for every eventuality,” the author of the report, Parliamentarian Michael Gove, said in the preface. “If we cannot secure a good agreement with the EU, we must be prepared to leave without a deal.”

Parliament is expected to be suspended Tuesday evening until October 14 to give Johnson’s government the chance to set out a new legislative agenda in a “Queen’s Speech.” This comes after the Supreme Court ruled Johnson’s previous request for a suspension of Parliament — or “prorogation” — was illegal, because it shut down debate for what it said was an unreasonable amount of time.

On October 17 and 18, a summit of EU leaders will take place in Brussels ahead of the crucial date of October 19, when Johnson must ask the EU for a Brexit delay if a deal, or a no-deal Brexit, hasn’t been approved by Parliament. The U.K. is currently set to leave the EU, with or without a Brexit deal, on October 31.