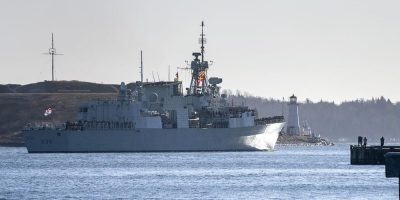 A Royal Canadian Navy admiral says a frigate departing today for the Mediterranean is prepared for “any threat” as tensions with Russia mount.

Due to COVID−19 restrictions, families weren’t permitted on the wharf in Halifax for the traditional sendoff as the HMCS Montreal pulled away from the jetty and its 240 crew members set off for the six−month deployment.

The navy has billed the NATO mission as part of “deterrence measures” in the region as tensions mount between Ukraine and Russia.

Rear Admiral Brian Santarpia, commander of Maritime Forces Atlantic, said this voyage is part of a regular rotation of ships sent to the Mediterranean and the Black Sea since Russia invaded and annexed Crimea in 2014.

He said the missions send a message to NATO allies that, “in the event of a crisis, we’ll be there right away.”

Santarpia also said the navy is aware that tensions are high in the region and the ship is at a “very high level of readiness.”

On the same day as the departure, U.S. Secretary of State Anthony Blinken was urging members of the alliance to remain united in the face of what he termed relentless Russian aggression toward its neighbour.

Blinkin said Russia plans to boost its military presence of some 100,000 troops along the border with Ukraine, suggesting that number may soon double.

— With files from The Associated Press