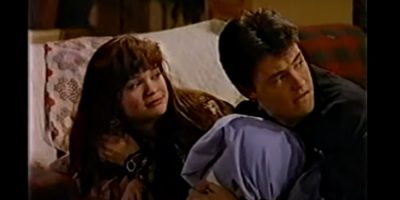 Ever done anything stupid in your 20’s and early 30’s?

Valerie Bertinelli admits she has after a story about her and Matthew Perry making out hit the mainstream.

In Perry’s autobiography ‘Friends, Lovers, and the Big Terrible Thing,’ Perry said he once made out with her while her then-husband, Eddie Van Halen, was passed out a few feet away.

The caption asks, “Anyone misbehave in their 20’s and early 30’s? Are you mortified?

Response to her video’s been largely supportive, with one person writing “Dude. You married Eddie van Halen. Do you think we expected good behavior? lol. Love ya, lady!

In 1990, The two starred in a short-lived sitcom called Sydney, and Perry says he was crushing on her hard.

According to entertainment weekly, Perry wrote “I fell madly in love with Valerie Bertinelli, who was clearly in a troubled marriage.”

One night at the couple’s home, he made his move.

“As the night progressed, it was clear that Eddie had enjoyed the fruits of the vine a little too hard, one more time, and eventually, he just passed out, not 10 feet away from us, but still, this was my chance!

“If you think I didn’t actually have a chance in hell, you’d be wrong, dear reader — Valerie and I had a long, elaborate make-out session. It was happening — maybe she felt the same way I did. I told her I had thought about doing that for a long time, and she had said it right back to me.”

The next day Bertinelli acted as if nothing had happened and essentially ghosted him before ghosting was even a thing.

For fun, look at this intro to the show ‘Sydney.’ There were just babies!