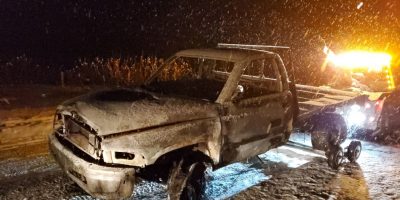 A man is facing impaired driving, theft, break and enter and other charges following a vehicle fire in Ramara Township.

On Thursday around 1:30 a.m., Orillia OPP were alerted to a vehicle on fire in a ditch on Concession Road D-E near County Road 169. Officers found a fully engulfed pickup truck with no licence plates. Fire crews from Ramara knocked down the flames. No one was located in or around the collision.

Police said the driver eventually returned to the scene and officers began an impaired driving investigation. The driver was arrested. Officers continued to investigate and found a loader on its side in the ditch a short distance away. Police allege the driver stole the loader from a nearby quarry in an attempt to pull his truck out of the ditch.

A 21-year-old from Orillia has a court date in March.