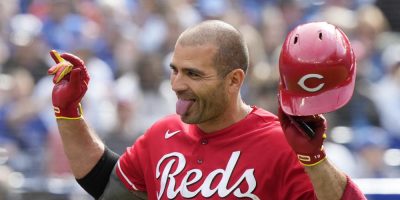 Canadian Joey Votto made another smashing return to his hometown.

The Cincinnati Reds first baseman crushed a towering eighth−inning home run off the right−field foul pole to give the Reds a 3−2 win over the Toronto Blue Jays on Sunday.

With the game tied at 2−2, the 38−year−old Votto, a Toronto native, hit a one−out, 2−0 curveball down the line off Blue Jays right−handed reliever Yimi Garcia (0−3).

“Of course, it’s great to be back here,” Votto said. “Playing in this city has great meaning to me, but I’m locked in on performing well that, whether it’s here or elsewhere.”

The first two months have been a struggle for Votto. The blast was his first of the year. The six−time all−star was activated from the COVID−19 injury list before the series opener Friday.

“I thought I’d be more nervous, but I didn’t feel that way,” he said. “I just felt more joy. I felt more satisfaction coming back here and being able to see family and be able to perform well.

“Whether it was in this city or another city, I missed the opportunity to play well.”

He finished the series 3−for−11 with a first−inning walk in the finale. Votto has made 12 career visits to Toronto and has 11 hits in 44 plate appearances, including four homers.

“I couldn’t be happier for him, not only as a player but just as a person,” Reds manager Dave Bell said. “I know how meaningful it is for him to do good things here in his hometown.”

The Blue Jays are one win behind the 23−18 mark they set at the first−quarter mark last season.

“The positive is we have been winning games without our offence being where it was expected to be,” Toronto manager Charlie Montoyo said.

Toronto starter Yusei Kikuchi struggled in the first. He faced eight batters and threw 37 pitches as Cincinnati grabbed a 2−0 lead.

Kikuchi walked three of the first four batters he faced to load the bases. Aristides Aquino then smacked a two−out, ground−rule double down the left−field line.

Kikuchi settled down to retire 10 in a row until Reds catcher Aramis Garcia led off the fifth with a single to left field.

“That first inning, I couldn’t quite get into a nice rhythm,” Kikuchi said. “I just couldn’t get into a good rhythm with good tempo, but in the second inning, I was able to get back into my groove, felt a lot looser and was able to calm down a little bit.”

Toronto pulled to within 2−1 in the second because of a leadoff double from Santiago Espinal and a run−scoring single to right field from Matt Chapman.

The Blue Jays tied the game in the third. A pitch hit George Springer on his left elbow. He moved to second on a wild pitch and took third base on Vladimir Guerrero’s long fly ball to centre.

Reds closer Art Warren enjoyed a 1−2−3 ninth inning for his second save. Cincinnati reliever Alexis Diaz (2−0) picked up the win for his two innings of work.

NEXT UP −− The Blue Jays begin a two−game set in St. Louis against the Cardinals (23−18) on Monday, the first of six straight on the road. Toronto right−hander Jose Berrios (3−2) will face fellow right−hander Miles Mikolas (3−2) in the series opener. Berrios stopped a two−game personal losing streak in his last outing with a 3−0 shutout victory against the Seattle Mariners last Tuesday.