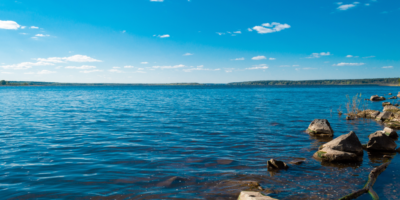 A new report released today paints a bleak future for Lake Simcoe on a number of fronts.

The report names four immediate threats to Lake Simcoe: Unsustainable growth and development around the lake, the Orbit MZO development in Innisfil, the Bradford Bypass and more planned highways, and the possible approval of the Upper York Sewage System. Two good things Lake Simcoe needs are listed as well: Keeping the Lake Simcoe Protection Plan strong, and growing the Greenbelt into Simcoe County.

The authors of the report say they have little good news to share on any of these issues.

“But growth pressures, be they in the form of new highway plans or greenfield development, will have environmental impacts on Lake Simcoe that are not getting enough attention,” says Simcoe County Greenbelt Coalition’s Executive Director, Margaret Prophet.

Claire Malcolmson, Rescue Lake Simcoe Coalition Executive Director and author of the report, says municipalities are doing their job in trying to protect the waterway.

“Municipalities have demonstrated their ability to stand together in defence of Lake Simcoe, as evidenced by their unanimous support for a successful bid to have the province pay the balance of a phosphorus recycling facility on the Holland River, announced last week,” says Rescue Lake Simcoe Coalition Executive Director, Claire Malcolmson, the report’s lead author.

Both groups caution that “if we carry on with the development and highway plans outlined in this report, it will be virtually impossible to save this beautiful freshwater ecosystem as we know it today.”

In this stark and information-rich report, Lake Simcoe area environmental groups shine a light on the dark clouds on Lake Simcoe’s horizon, cautioning that “if we carry on with the development and highway plans outlined in this report, it will be virtually impossible to save this beautiful freshwater ecosystem as we know it today.”

The Who Will Take Care of Lake Simcoe? report is available here https://rescuelakesimcoe.org/wp-content/uploads/2022/04/2022-Update-Under-Pressure-Report-Final.pdf  and the sections will be highlighted in one-a-day social media posts and blogs on each section.