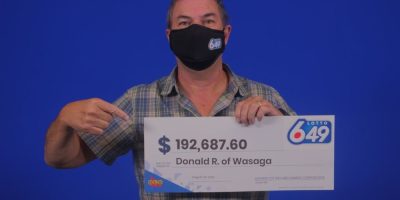 Donald, a 58-year-old retiree, said he’s been a regular lottery player for years and usually plays LOTTO 6/49. “This win was from a Free Play I won from a Quick Pick,” he shared while at the OLG Prize Centre in Toronto to pick up his winnings.

Donald said he checked his ticket on the OLG App. “When I saw Big Winner I thought, is this real? I was happy, excited – all of the feelings!”

Donald texted a screen shot to his wife, but she didn’t believe him. “She responded with, ‘That’s not funny.’ I had to scan the ticket in front of her before she believed it!”

He plans to complete some home renovations, plans some trips, and purchase a new truck with his windfall. “I have lots of fun decisions to make. This win will bring a lot of joy to my family,” Donald concluded.