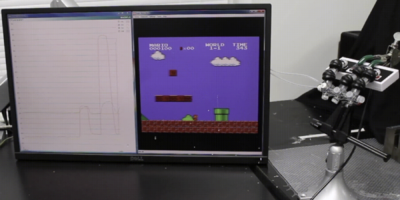 Engineers have created an inflatable robot so nimble it can beat the classic Nintendo game Super Mario Bros.

The machine, pioneered by Ryan Sochol, an assistant professor of mechanical engineering, and other researchers at the University of Maryland, resembles a three-fingered hand and uses an emerging technology called soft robotics to manipulate objects. Its movements are pressure controlled, powered by air and water instead of electricity, and are so precise that the robots can be modified to fit an array of prosthetics and biomedical devices.

Typically constructed with malleable materials like rubber or silicone, soft robots have been used by hospitals and in manufacturing for years. Most look more like an octopus than a stiff android covered in wires, like C-3PO from Star Wars.

Robots moved by water and air

What distinguishes Sochol’s design is that it uses new fluidic circuits to control machines. Much like the electronic microchips in your computer and phone, fluidic circuits are integrated microprocessors that use water and air pressure to control computing devices like robots.

“These special types of robots are powered using fluids like water or air,” Sochol told CBS MoneyWatch. “What’s special here is that we made a new type of fluidic circuit that can sense the pressure types of air to decide how it’s going to behave. Soft robots can stretch or be inflated or deflated relatively easily. As a result, they have inherent adaptability to reform around complex and sometimes delicate objects.”

This allows soft robots to be implanted in places that hard robots made of metal and wires can’t be, like inside a human body. According to Nature, soft robots with tissue-mimicking sensors could have a range of biomedical uses, including surgery, drug delivery and prosthetics.

Some soft robots can even mimic human organs like the heart. A robotic heart sleeve “uses compressed air to power artificial silicone muscles that compress and twist, mimicking the movements of the normal human heart,” according to one science journal.

In 2015, researchers at Harvard built a soft robotic glove that mimics the human hand. Designed to assist people who experience a loss of motor function, the robot is strong enough to lift everyday objects and precise enough to button a shirt.” Soft robotics is thrilling because the potential to help people is endless,” said Sochol.

To manufacture the robot, Sochol’s team used a process called PolyJet 3D Printing, which they described as “like using a color printer, but with many layers of multi-material ‘inks’ stacked on top of one another in 3D.” The integrated design means the robot can follow complex commands with relatively simple inputs, like water pressure. It also means the robot can be printed and deployed quickly as one integrated unit, rather than as individual components.

With the hope of broadening the accessibility and adoption of soft robotic technology, Sochol’s team released the files for free on GitHub, and the University of Maryland published the design documents on its Terrapin Works website.

“We’re sharing our design files as open-source so that anyone can download, alter and 3D print their own version of our work,” Sochol said. “We hope this accelerates research and improves lives.” 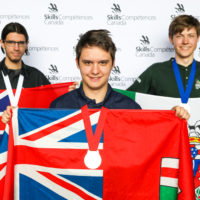