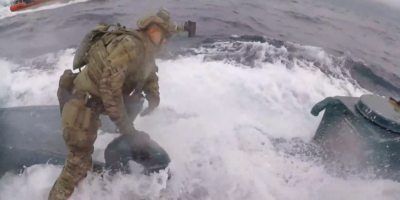 The U.S. Coast Guard has released some dramatic footage reportedly showing its members chase down a homemade submarine.

The video, said to have been shot on June 18th, shows crew members chase down the suspected drug smuggling craft, while patrolling open waters of the Eastern Pacific Ocean.

Drugs said to have been seized from the craft among an estimated $569 million in seized contraband from the Pacific last month according to Coast Guard officials.