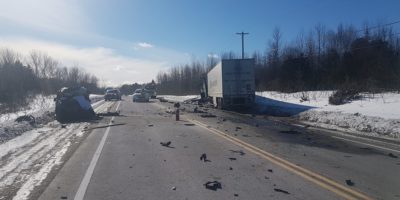 One person is dead following a crash in Waubaushene.

The OPP say an eastbound vehicle somehow crossed into the opposing lanes and was involved in a head on crash with a transport truck, just before 2:00 Tuesday afternoon.

The driver of the eastbound vehicle was pronounced dead on scene, while the transport driver was not hurt.

Highway 12 was closed shortly after the collision between Gratrix Road and Frazer Lane for police investigation.