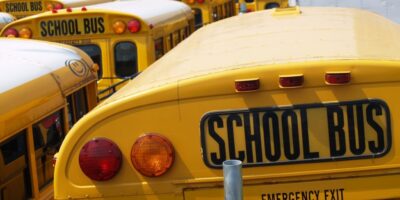 It is the bane of parents of school-aged children in Simcoe County who ride the bus.

Those mornings when school buses are cancelled because of severe weather.

The people that manage the Simcoe County Student Transportation Consortium (SCSTC) are aware that cancellations can equal disruption in households.

But front and centre for the SCTSC is the safety of students.

“We transport about 36,000 students on 720 vehicles and travel about one and a half times the circumference of the earth in mileage per day in Simcoe County,” explains Sean Levasseur, Safety and Accountability Officer for the SCSTC.

This Headline and More Were Included In Our Daily Kickstart Podcast

Simcoe County is a massive region where winter weather can be night and day depending on location, especially when those infamous snow squalls fire up off of Georgian Bay and Lake Huron.

One of the best, or worst examples, in which the SCSTC was spared because of the holiday season, was the severe snow squalls that dumped copious amounts of snow in the Orillia area during Christmas but left places 20 minutes away like Barrie unscathed.

“We’re super cognizant of the fact that any time we have changes with transportation, whether we have cancellations or delays, we affect families, that trickle-down effect in families where parents can’t go to work or have to work from home,” says Levasseur. “We take all that into consideration when we make cancellations, and it is certainly top of mind, but safety is our number one priority.”

Monitoring the weather days in advance is part of the job.

Levasseur says that based on the type of weather event that is expected, operators and snow captains around Simcoe County are given a heads-up to expect a call the next morning.

“They’re out there anywhere from three o’clock in the morning until five o’clock checking the roads and checking with the townships,” says Levasseur. “They will have people that drive to specific pockets and areas, and turnarounds, to make sure they have a real good idea of what is going on in each specific area.”

“From there, there is a conference call at 5:30 in the morning to make the decision as to whether they’re going to call in the operators en masse and decide zone by zone whether we’re going to cancel or run (the buses).”

Before the weather zones, school bus cancellations in Simcoe County were done in one fell swoop, or in other words, while it was a blinding snow squall event in the Barrie and Orillia area, the school buses were also pulled off in southern sections of the county like Bradford and Tottenham where the day was expected to be sunny.

Now, the county is divided up into four weather zones – south, central, west and north.

There is no simple answer or perfect solution, and as Levasseur says, there are many components to cancelling the buses.

“We’re at the bay and mercy of obviously the information we have at hand with The Weather Network, Environment Canada and AccuWeather, and so on,” he says. “And with that information, it’s not, as we know, entirely accurate all the time, and it doesn’t come to fruition as it is laid out in front of us.”

Levasseur says their township partners are also on their own schedule when it comes to clearing the roads, and the SCSTC must take that into consideration, such as snow removal, sanding and salting.

About 70 to 80 per cent of the school bus routes in Simcoe County have a rural component.

“We’re sending a bus into the rural area and then trying to have it do a run and then come back to town,” says Levasseur.

One of the greatest challenges for the SCSTC is making a call about cancelling buses not based on what is happening at that moment but on what is forecast to take place later in the day when students need to be bussed home, such as snow and freezing rain.

“Yes, the projection calls are our greatest nemesis, if I am being totally honest,” admits Levasseur. “We’re at the bay and mercy of professionals that do weather all day every day, and we try to get as much data as we can before we make that decision, but at the same token, like I said, every decision we make is about student safety.”

SCSTC by the Numbers