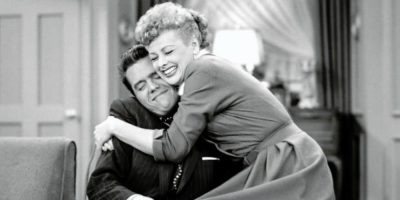 On a Hollywood lot where one of America’s biggest stars ever first filmed her groundbreaking show, a young artist named Yolanda Glass has been hard at work.

“One of the workers who came by who worked on the lot, he looked up and he was like, ‘Lucy would be proud of this'” she told correspondent Jim Axelrod. “I can’t describe how encouraging that felt.”

Yes, count this thirty-something among the millions who, 70 years after the premiere of “I Love Lucy,” still love Lucy.

Glass said, “There wouldn’t be a myriad of the female and people of color who are comedians out right now without her foundation.”

The show’s 180 episodes over six seasons on CBS followed the madcap adventures of Lucy Ricardo, and the trouble she whips up trying to break out of her mid-century middle-class life … married to Cuban bandleader Ricky Ricardo, played by her real-life husband, Desi Arnaz.

Nowhere is the show’s hold on the public easier to see than in Jamestown, New York, where Ball was born 110 years ago, and where two museums celebrate “I Love Lucy,” featuring replicas of the show’s iconic sets.

“All I think about is the amount of extraordinarily well-done physical comedy that took place here,” said Journey Gunderson, the executive director of both the Lucy-Desi Museum and the National Comedy Center.

“I think in some ways Lucille Ball’s legacy can be appreciated now through a 2021 lens perhaps better than it ever has been able to be appreciated,” Gunderson replied.

Start with the series’ enormous popularity. The episode in which Lucy gave birth, on January 19, 1953, reached 44 million viewers – 15 million more than watched Dwight Eisenhower be sworn in as our 34th President the following day.

Lucy and Desi marked new territory for television – still evolving as a cultural institution.  She was the All-American girl; he was a Cuban-born transplant. For its time, controversial casting that Lucille Ball insisted on, more than a decade before the height of the civil rights movement.

“She risked everything,” Gunderson said. “I think America raised its eyebrows, but then they quickly started laughing.”

Ball and Arnaz were TV pioneers in an impressive list of other ways as well. The laughter was so loud when they filmed, it was recorded and used for other shows, helping to launch “canned laughter” as a standard production technique.

The show where she gave birth capped TV’s first-ever pregnancy plotline on a big-three network sitcom. “It was still taboo for a woman who was pregnant to be out in the open in front of everyone,” said Gunderson.

And when Ball needed some time off post-delivery, Arnaz offered up a first that changed the Hollywood business model forever: just repeat some episodes that had already aired.

“Yes!” said Gunderson. “And the story goes that CBS executives laughed at him, and said, ”Who’s gonna want to watch them after they aired?'”

“Being the Ricardos” and “The Queen of Tuesday” Novel

It turned out everyone would – which is why, 70 years later, Lucille and Desi are still cultural icons – the subject of a new Aaron Sorkin movie, “Being the Ricardos,” with Nicole Kidman and Javier Bardem; and a novel, “The Queen of Tuesday,” by Darin Strauss.

“She was famous to a degree that hadn’t existed before her, really,” Strauss said. “When they’d cut to commercial, the water tables would drop in the big cities, ’cause the entire country was going to the bathroom at the same time.”

While intrigued by her immense public appeal, Strauss found her private pain most compelling. “She and Desi were perfect together, except for the fact that they weren’t,” he said. “She loved him. He loved her. And yet, they couldn’t live together.”

On camera, Arnaz was an understanding, loving husband. Off-camera, he was an alcoholic and a womanizer. “She knew she couldn’t divorce him, because that would let the country down,” said Strauss. “That’s how powerful that bond was for us. It was like a civic bond.”

In his novel, Strauss gives Lucy love in the form of an affair, with his own grandfather. “I wanted to give her a love story of her own; that’s why I told this story in this way,” he said.

Watch The Trailer For “Being The Ricardos”

But that’s fiction. The fact: Lucy and Desi did eventually divorce. Both remarried. But most poignantly, Strauss says, if she were asked at the end of her life who was the love of her life, she would have said, “Desi Arnaz. Absolutely.”

“At the root,” said Kate Luckinbill, “they were connected by their souls.”

She should know; she’s their granddaughter. “We had a very special bond,” she said.

“Your grandparents did remain in love ’til the end of their lives?” asked Axelrod.

Luckinbill is now the head of creative direction at Desilu, the studio founded by her grandparents. Years after “I Love Lucy,” Lucille Ball greenlit shows like “Star Trek,” “The Untouchables,” and “The Twilight Zone.”

And she is keeper of the “I Love Lucy” flame: “There’s a healing quality to that show. That’s what I feel I’m here to do, is to remind people of the elixir that they brought the world.”

Luckinbill is protective of the memory of her grandfather, who died in 1986 at the age of 69, and her grandmother, who died three years later from an aortic aneurysm, at 77.

But she also wants to look at them honestly.

Axelrod asked, “Better we allow the illusion to move aside and let’s deal with the reality?”

“Yeah, yeah,” Luckinbill said. “And why it’s so important not to let people like that die in their 70s from a heart explosion and alcoholism. Because neither of them should’ve been gone. They died of sadness and trauma, both of them.”

No Hollywood ending, perhaps, but what Lucy and Desi did give the world still has an extraordinary impact 70 years later.

Just ask young Yolanda Glass: “That was, like, the first time I got to see a female being funny and silly and embarrassing. And it was cool! I feel like when I was really little, there was this idea that you have to be polite and quiet as a woman. And when I watched her show, that was the first introduction of, ‘You don’t have to be quiet. You could be funny. You could be loud. And it was okay.'”

“And guess what? America’s gonna love it!” said Axelrod.