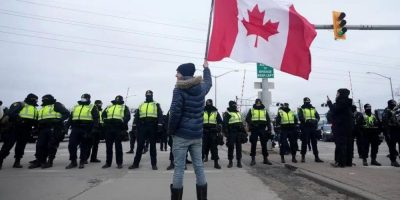 Police in Windsor, Ont., started to push back protesters clogging a key trade artery between the United States and Canada on Saturday, even as demonstrations against COVID-19 public health measures continued in Ottawa and other cities across the country.

Officers with the Windsor Police Service, the RCMP, Ontario Provincial Police and others slowly started moving in on protesters near the Ambassador Bridge around mid-morning after a court-ordered deadline for clearing the site passed – and was largely ignored – on Friday evening.

Shortly before noon on Saturday, a line of police officers slowly advanced on the protesters who had gathered at an intersection at the foot of the bridge, forcing the demonstrators farther and farther away from the site.

The officers were supported by two RCMP armoured vehicles and several police cruisers in a show of force that the roughly 200 protesters who had gathered to air their grievances greeted with renditions of O Canada.

The demonstrators nonetheless fell back from the site, even as protesters who had gathered in other communities to resist vaccine mandates, pandemic-related restrictions and other issues watched via livestreamed video and shouted encouragement.

“Let’s go Windsor,” one supporter called over a channel on a messaging application used by the demonstrators. “Hold that line.”

Police had stopped their advance by around noon, starting a new standoff between the two sides with traffic still unable to cross.

The blockade at the Ambassador Bridge linking Windsor and Detroit has stemmed the flow of hundreds of millions of dollars in cross border trade, prompting entreaties from U.S. President Joe Biden and Michigan Governor Gretchen Whitmer for Canadian officials to reopen the crossing.

The blockade of Canada’s busiest border crossing followed nearly two weeks of protests that first started in Ottawa but have since spread to other cities and ports of entry here and around the world.

Federal, provincial and municipal politicians of all stripes are now calling for an end to the blockades, whose original stated aim was to protest vaccine mandates for cross-border truckers but which have since evolved into a catch-all movement opposed to all public health restrictions and sometimes calling for the unlawful overthrow of democratically elected governments.

While the protests have disrupted businesses and trade in different parts of the country, concerns have also been raised about the presence of far-right extremists and hate groups using the protests to advance their ideological agendas and messages.

The police action in Windsor is arguably the strongest response by law enforcement to the mass protests since the start of the demonstrations, and came as demonstrators continued to cause disruptions in other parts of Canada.

Hundreds of people and dozens of trucks remained dug in along Wellington Street in front of Parliament Hill and around downtown Ottawa, where many have been parked since the end of January.

At the intersection one block away from Parliament, demonstrators had taken over a parking lot and were blasting music as passersby danced. Trucks began honking their horns continuously in the area as police officers sat parked in nearby vehicles.

A stage had been set up on the street in front of Parliament Hill where a line-up of speakers was set to address the crowd, which grew through the morning as people started to arrive.

The Ottawa Police Service, which has been criticized for not taking a harder line with the protesters, reported some demonstrators “exhibited aggressive behaviour” by refusing to follow directions and even overwhelming officers.

“All available officers were deployed last night,” Ottawa Police said in a statement on Saturday, adding: “We have a plan to end this unlawful occupation and await the necessary reinforcements to do so.”

Ottawa Police Chief Peter Sloly said Friday the biggest limitation on his force’s ability to end the crisis is a lack of officers, adding he had no response to his request for 1,800 personnel from the RCMP and Ontario Provincial Police.

Prime Minister Justin Trudeau said the RCMP and OPP had carefully examined the request “to look at what exactly the plan is, what is exactly needed – and what is needed is being provided to be able to move through this in a peaceful, responsible way.”

Trudeau has refused to speculate on when the current crisis might end, and antigovernment protesters railing against COVID-19 measures seemed unfazed by the latest efforts to rein them in.

Jurisdictional battles and partisan tensions also appeared to be hindering collaboration on resolving the disruptions.

Ontario Premier Doug Ford declared a state of emergency Friday that will allow his cabinet to impose $100,000 fines and up to one year in jail as punishments against people who continue to illegally block roads, bridges, and other critical infrastructure.

Both Ford and Trudeau told protesters if they don’t go home, the sanctions they face could ruin their lives.

More demonstrations were underway or being planned this weekend in other parts of the country, with blockades continuing at the border crossings in Alberta and Manitoba and another planned in Saskatchewan.

Hundreds gathered outside the Ontario legislature in Toronto, where crowd members of all ages waved Canadian flags and cheered as a speaker declared the event to be about freedom.

Diane Elms, a homeopath from Hagersville, Ont., was on hand with her grandchildren. She said she felt it was important to show them the importance of fighting for their rights to choose whether or not to get a vaccine and argued governments should not require inoculations.

Protesters were also planning to gather in Halifax, Regina and other cities.

This report by The Canadian Press was first published Feb. 12, 2022.

– with files from Noushin Ziafati in Windsor, Ont., Erika Ibrahim in Ottawa and Ross Marowits in Toronto