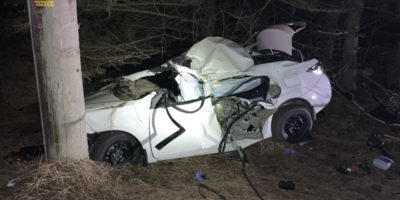 A terrible crash in Innisfil has left an 23 year old Oshawa woman in a Toronto trauma centre with critical injuries.

South Simcoe Police said around 1:30 this morning an officer located a car that had been in a single-vehicle collision on 20th Sideroad between Lockhard Road and the 10th Line.

Police determined the vehicle left the road, struck a culvert and went airborne before hitting a utility pole. The Innisfil fire department had to cut the lone occupant of the car from the wreckage. She was transported to a local hospital by paramedics then airlifted to a Toronto trauma centre.

Anyone who witnessed the collision is asked to call police.