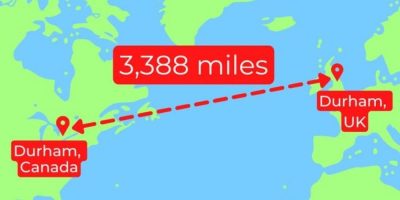 A woman in need of help mistakenly reached out to police in Durham, England, 4,000 kilometres away.

The woman lives in Durham Region.

Police in Durham, England received an urgent message via online chat from the woman who reported an intruder in her home in Ajax.

She had typed “I need help, he is in the house” before falling silent.

Realizing the woman had made a mistake, they kept the line open and contacted their counterparts at Durham Regional Police.

A suspect was eventually located in the backyard of a home, and according to police in Durham, England, he was tasered.

The man has been charged with numerous offences including break and enter, assault and forcible confinement.

Police added that the woman needed medical treatment for her injuries.

🌎 Our quick-thinking control room team helped save a woman 3,000 miles away after an intruder got into her home.

We were contacted on Wednesday on our online Live Chat facility by a distressed woman who reported an intruder trying to get into her home in Durham, Canada. pic.twitter.com/AqbLX1Vazd

In a tweet, inspector Paul Hallett of Durham Regional Police called the situation a “success story of international cooperation.”

Inspector Hallett, of Communications/9-1-1 “This is certainly a success story of international cooperation between 2 comm centres separated by tremendous distance. We are grateful for the assistance of our @DurhamPolice colleagues in ensuring we received this critical info. https://t.co/28y8YAjZHO