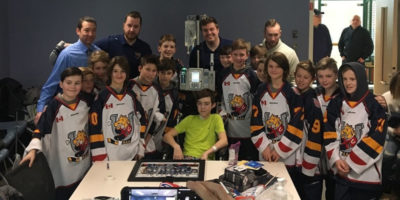 Wyatt was diagnosed in December and was facing months of aggressive chemotherapy.

The local hockey world rallied in support of Wyatt contributing to a Go Fund Me page.

And Pittsburgh Penguins captain Sydney Crosby, hearing of Wyatt’s battle,
invited him and his team to Toronto last weekend for the Penguins game against the Leafs.

These are the words we heard today. After surgery on Wednesday to try and grab a piece of what looked like left over tumor Wyatts surgeon told us he could not find anything but scar tissue. Battle scars left behind from his war with cancer. A battle that was won with the support of thousands of warriors that joined us on this journey.

We were never told until 2 weeks ago that this could all be over by now. June was our go to date. With love, positive energy, faith and overwhelming support Wyatt shocked the doctors as he continued to recover so quickly from each round of chemotherapy. He shocked them again when they took pictures and saw that his cancer looked to be completely gone.

We avoided 4 more cycles of Chemotherapy. Next week Wyatt will be finished his 5th and final cycle of chemo and we will begin to pick up the pieces of our lives and reunite the family for good. Wyatt will begin his recovery and integration back into the world he remembers. Hudson & Luke will get their big brother back and Macey will be able to drive him crazy again.

We cannot help but think that this couldn’t have happened without all of you. Please continue to support anyone fighting cancer. We can be too proud to ask for help but we all need it. Everyone matters in this fight against a disease that has surely touched all of you in some way.

While we have a happy ending we all know that so many times this isn’t the case. To all of the families which continue their fight through there cancer we are thinking of you and are here for you. Thank you to all of you from our entire family. Wyatts Warriors Rule!