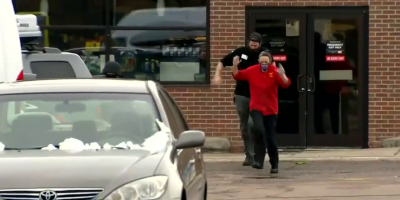 A gunman opened fire in a Colorado supermarket Monday, killing 10 people including a police officer, authorities said. One person was taken into custody at the scene in Boulder, where police said there was no ongoing threat to the public.

Boulder Police Chief Maris Herold identified the slain officer as 51-year-old Eric Talley, who had been with the department since 2010.

No other victims were identified.

Officer Eric Talley is my big brother. He died today in the Boulder shooting. My heart is broken. I cannot explain how beautiful he was and what a devastating loss this is to so many. Fly high my sweet brother. You always wanted to be a pilot (damn color blindness). Soar. pic.twitter.com/tgt2DxPsqz

Dougherty said the person in custody was the shooter.

CBS Denver helicopter footage captured authorities escorting a shirtless man in handcuffs who appeared to have a bleeding leg from the scene, but authorities would not confirm if that man is the person in custody.

Witnesses described a chaotic scene as several loud bangs went off in the store. One man said he first thought someone had dropped something but by the third shot, he said, everyone started running.

The Colorado chapters of Moms Demand Action and Students Demand Action denounced the Boulder shooting. Both are part of Everytown for Gun Safety, which calls itself the largest gun violence prevention organization in the country.

“This is yet another in a long string of horrific tragedies, from Boulder today to Atlanta last week to the dozens more people in the United States who are shot every day, but whose stories do not make the headlines,” he said. “To save lives and end these senseless killings, we need more than thoughts and prayers — we need federal action on gun safety from the Senate and the administration, and we need it now.”

Shannon Watts, founder of Moms Demand Action said, “We can’t and won’t accept gun violence in our supermarkets to spas to our homes, as just another fact of life. It’s past time for our leaders to act and protect us from gun violence.”

And Colorado Moms Demand Action volunteer Nicole LiaBraaten called it “yet another painful reminder of our nation’s urgent gun violence crisis. We should not have to fear for our lives doing something as simple as going to the grocery store. We must work to strengthen our gun laws and protect our communities from tragedies like this.”