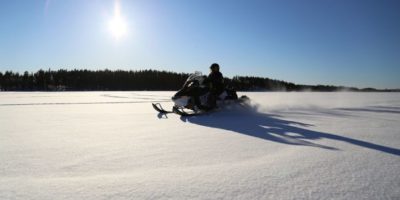 An 11 year old boy suffered a broken arm and facial injuries Monday when he lost control of a snowmobile on an island on Kahshe Lake.

OPP, Muskoka EMS and Gravenhurst firefighters were called to the scene around 5pm.

Police say he had been doing ‘doughnuts’ on the ice when he lost control of the 600cc  which climbed a steep embankment and struck a tree before tumbling back down to the ice.

The child was wearing .

He was transported to by ambulance before being flown to Sick Kids Hospital in Toronto.

The exposure of young people to the operation of motorized vehicles like snowmobiles and all-terrain vehicles (ATV’s) is an important part of their development into safe and competent riders. Even when children are closely supervised, parents must be aware of the potential for disaster that arises when inexperience is combined with the power of these machines. Please take all possible precautions and be mindful of the extreme dangers when teaching your children to operate snowmobiles and ATV’s. Smaller, less powerful machines are available and help to minimize the dangers of learning to ride.