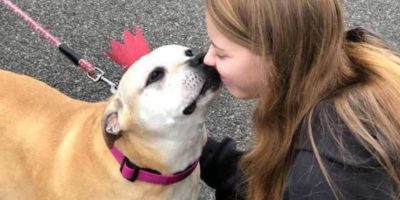 Sandi, a pit bull-boxer mix, is a 12-year-old dog who’s finally enjoying her moment in the sun. Sandi had been in a shelter at the Marion-Grant County Humane Society in Indiana for a long time — a really long time.

Sandi was adopted last Friday by Erin and Cary Rhodes, who are big supporters of the shelter, a shelter employee named Christy told CBS News. “Their dog passed away and [Erin] kept calling me and she said ‘I really just can’t keep my mind off of Sandi,'” Christy said.

The shelter was ecstatic that Sandi finally found her forever home. They usually post on their Facebook page when dogs get adopted, but for this special pup, they pulled out all the stops. Sandi took her “freedom walk” out of the shelter and onto a red carpet. The shelter superstar even wore a crown to greet her new parents.

“It was a big celebration,” Christy said. “We did this one more special than normal, because she had been there so long.”

The video went viral and made big impact. “Over the weekend, we got several applications for animals,” Christy said, attributing the spike in interest to Sandi’s viral video.

Christy said there was never any question that they would continue taking care of the aging dog as long as needed — but they’re glad a family wanted to adopt her as their own.

“This is why we didn’t give up on her. We knew she would find her forever home sometime. And it’s OK if it takes a little time to find her the right home. Then we don’t have to worry about her coming back or anything bad happening to her,” Christy said.  “She kind of ran the place. She’s kind of the boss,” she joked.