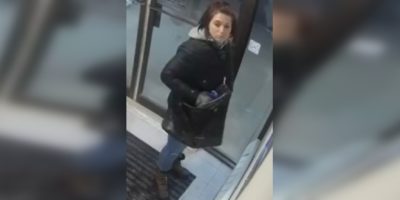 The Barrie Police Services have made video available of the woman they say used bolt cutters to gain entry into a Kozlov St. apartment lobby in mid-November.

Barrie Police have released additional images of a woman they say used bolt cutters to get her way into an apartment building in town.

Just before 2:30 on the morning of November 15th, a woman is accused of using bolt cutters to get into the lock box of an apartment building on Kozlov St., using the keys within the box to gain entry to the apartment’s front lobby. Video surveillance shows the woman leaving through a rear door about half an hour later. It is not believed anything was taken.

Related: A Lot of Work For Nothing in Barrie

Anyone with information is asked to contact Constable A. Campbell of the Barrie Police Service at 705-725-7025 ext. 2703 or acampbell@barriepolice.ca. Any information can be provided anonymously to Crime Stoppers at 1-800-222-TIPS or leave an anonymous tip online at www.p3tips.com.