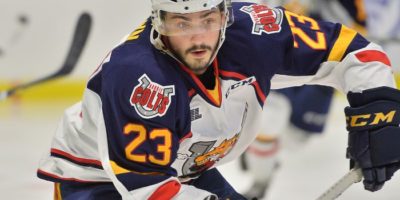 Monday nights were a special night for Aidan Brown and his teammates.

The Barrie Colts would get together, but it wasn’t to hit the ice for practice or a game.

Nope, Mondays they’d gather in front of the television and watch their favourite TV show.

“I definitely, definitely miss Bachelor Mondays,” said the Newmarket native, who is back home anxiously hoping the OHL will resume play after having to put the season on hold because of the COVID-19 health crisis. “Not going to lie to you, the boys are big Bachelor fans.”

While Pilot Pete Weber picked Madison Prewett over Hannah Ann Sluss in the finale earlier this month, Brown and his teammates had plenty to debate all season as Weber decided among the group of women vying for his heart.

“We were all definitely putting our input in to see who Pilot Pete would pick,” Brown said, before laughing out loud. “It was a good time.”

Brown misses those nights. He misses the dressing room antics between Nicholas Porco, Tyson Foerster and Ethan Cardwell. The trio would get each other going good, drawing laughs from their Barrie teammates.

“It’s hard to explain the bond the team had this year,” the 20-year-old said. “The way we all treated each other and hung out with each other.”

The overage winger yearns to return to the ice with his teammates and prepare themselves for the OHL playoffs, but all that is on hold as the deadly virus has brought most of the world to a standstill.

When or if hockey returns this season, no one knows.

“It’s brutal,” Brown said of not playing right now. “I know I hate it and all the guys hate it, especially because we were really excited going into the playoffs. We felt like we had a really good chance to do something this year and it’s tough when something like this happens and it’s kind out of our control.”

The OHL recently announced the cancellation of the final two weekends of regular season action and while the hope remains they can get the playoffs in before its too late, the chances of that happening appear slimmer by the day as the virus shuts down every day life and social distancing becomes crucial in hopes of stopping the spread.

That means Brown, who is in his fifth and final season in the OHL, may have played his last junior hockey game.

“It’s hard,” he admitted. The way I think about it is probably different than a lot of guys on the team. It’s my last year, so I really want to come back. I don’t want to end my OHL career like this. Other guys can look forward to next year and maybe the next two or three years they got here, but I’ve had a long career in Barrie and I wanted to go out with a bang and a great playoff run with these guys.

“If we can’t do that, it’s going to hurt a lot. I know the guys are definitely hoping we can get the playoffs in.”

The power forward was playing the best hockey of his junior career. In 57 games, he had posted a career-best 20 goals and 27 assists for 47 points and played on both the power play and penalty killing units.

The veteran was excited about what the young club could do in the playoffs. Written off after a trade deadline where the Colts moved several key players like Tyler Tucker, Jason York, Ryan Suzuki, and captain Jason Willms, they surprised many with a solid second half despite being one of the OHL’s youngest teams.

They were anxious to prove themselves again in the playoffs, but that might not happen now

“It’s hard, because I felt like I was having a good year personally and I think the team was having a great year,” the six-foot-one, 185-pound winger said. “When you look at it now and see all the adversity that we dealt with and everything that happened in the year span and season, it’s tough to see how it happened. Not out of nowhere, but it happened really quick.

“It’s definitely tough and hard to have it sink in.”

As badly as he wants to play hockey, Brown knows there are more important things right now. He knows the virus must be stopped from spreading and that means everyone staying home and keeping their distance.

“It’s real important and everyone’s got to stay safe,” he said. “Everyone’s health is always the most important thing. It’s a hard thing to compromise someone’s health. I think they took the right steps that we need to do to protect everyone and help everyone, but it’s hard.

“It’s my last year and I want to play it out, and we got guys who are trying to get drafted. They want to show scouts, they want to show people what they got and it’s hard to do that when we’re all at home.”

He can’t believe how quick his five years in Barrie have gone by. He still recalls in his first year when veteran Brandon Prophet told the group of rookies about how quick time flies here.

“We all kind of laughed,” Brown remembers. “We all said, ‘What is this guy talking about, we all got four more years here. I don’t know what you’re talking about.’ Well, it’s really kicked in.”

The possibility that it’s all come to an end for him is tough to take, especially since there’s so many people he wanted to thank for helping him over the years and to say a proper goodbye to.

All the staff who work at the arena, people who he met in Barrie over his five years there.

“It’s tough knowing that I might not be able to say goodbye to those people,” Brown said. “I got some phone calls I got to make because I want people to know how much I appreciate them and what they did for me in my time in Barrie. I loved playing in Barrie and all the people I met are unbelievable.”

Brown says all the players have kept in touch with each other just about every day. They have a group chat going, but he misses the friends who he spent every day with. He roomed with Foerster, whom he calls one of his best buddies.

“Seeing the success he had throughout the year made me real happy,” Brown said of Foerster, who is one of the top prospects for this year’s NHL draft.

He is so thankful for coaches Dale Hawerchuk, Todd Miller and Warren Rychel and how they have not only shaped him into the player he is, but the person he is today.

“I can’t thank Dale enough for giving me an opportunity to play for the Colts and helping me grow my game,” said the Colts’ third-round pick in 2015. “Him and Miller were with me my whole ride and they were both unbelievable.

“The way Todd stepped in this year. Todd’s an unbelievable coach and I can’t wait to see him coach more, because he’s a great head coach. It’s just tough. I wish I could play in Barrie forever, but it’s just not how it is.”

Still, Brown holds out hope that playoffs will happen. That his OHL career will have a proper ending, but above all that he’ll get one last run with his Barrie family.

“You definitely have to have some hope,” he said. “I’m still working out. It’s hard to find ice right now with all the rinks closing, but you still got to hold hope. You got to keep in shape and I’m really hoping that we can comeback for playoffs and I know the guys are too.

You got to be a little realistic with everything that’s going on in the world right now. . . I really hope we can come back for playoffs.”