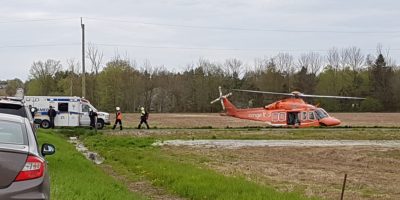 South Simcoe Police are investigating a crash that sent six to hospital.

Two vehicles, a pickup and sedan, were involved in the crash around 10:30 this morning, on 9th Line of Innisfil. Police confirm three adult, two children and a teen were involved. The 50-year-old man in the pickup, along with his 16-year-old male passenger, were treated for minor injuries and released. A 23-year-old Innisfil man and 27-year-old woman from Barrie are both listed in serious but stable condition. A two-year-old girl with them has been released from hospital, while an 8-year-old girl remains in Toronto hospital with serious injuries.

The 9th Line of Innisfil was closed until nearly 3:00 Wednesday afternoon for an investigation into this crash