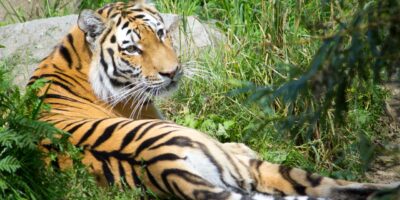 It’s impossible to deny — humans are changing and destroying the natural environment at an unprecedented and alarming rate. According to a new report, animal populations have declined by such a staggering amount, that only an overhaul of the world’s economic systems could possibly reverse the damage.

Nearly 21,000 monitored populations of mammals, fish, birds, reptiles and amphibians, encompassing almost 4,400 species around the world, have declined an average of 68% between 1970 and 2016, according to the World Wildlife Fund’s Living Planet Report 2020. Species in Latin America and the Caribbean, as well as global freshwater habitats, were disproportionately impacted, declining, on average, 94% and 84%, respectively.

Every two years, the World Wildlife Fund (WWF) releases its landmark report, revealing how far species populations have declined since 1970 — an important marker for the overall health of ecosystems. The latest report indicates that the rate populations are declining “signal a fundamentally broken relationship between humans and the natural world, the consequences of which — as demonstrated by the ongoing COVID-19 pandemic — can be catastrophic.”

“This report reminds us that we destroy the planet at our peril — because it is our home,” WWF U.S. president and CEO Carter Roberts said in a statement. “As humanity’s footprint expands into once-wild places, we’re devastating species populations. But we’re also exacerbating climate change and increasing the risk of zoonotic diseases like COVID-19. We cannot shield humanity from the impacts of environmental destruction. It’s time to restore our broken relationship with nature for the benefit of species and people alike.”

Humans are to blame

The report blames humans alone for the “dire” state of the planet. It points to the exponential growth of human consumption, population, global trade and urbanization over the last 50 years as key reasons for the unprecedented decline of Earth’s resources — which it says the planet is incapable of replenishing.

The overuse of these finite resources by at least 56% has had a devastating effect on biodiversity, which is crucial to sustaining human life on Earth. “It is like living off 1.56 Earths,” Mathis Wackernagel, David Lin, Alessandro Galli and Laurel Hanscom from the Global Footprint Network said in the report.

The report points to land-use change — in particular, the destruction of habitats like rainforests for farming — as the key driver for loss of biodiversity, accounting for more than half of the loss in Europe, Central Asia, North America, Latin America and the Caribbean.

Much of that land is being used for agriculture, which is responsible for 80% of global deforestation and makes up 70% of freshwater use. Using this much land requires a vast food system that releases 29% of global greenhouse gases, and the excessive amount of land and water that people are using has killed 70% of terrestrial biodiversity and 50% of freshwater biodiversity. Many species simply cannot survive under the new conditions forced upon them when their habitats are altered by humans.

Destruction of ecosystems has threatened 1 million species — 500,000 animals and plants and 500,000 insects — with extinction, much of which can be prevented with conservation and restoration efforts.

The food industry needs an overhaul

Where and how humans produce food is one of the biggest threats to nature, the report says. Much of the habitat loss and deforestation that occurs is driven by food production and consumption.

One-third of all terrestrial land is used for cropping and animal breeding. And of all the water withdrawn from available freshwater resources, 75% is used for crops or livestock. If current habitats remain the same, researchers predict that cropland areas may have to be 10-25% larger in 2050 than in 2005, just to accommodate increased food demand. That increase is expected, despite more than 820 million people facing food insecurity, indicating that much of the agricultural strain is being wasted.

Meanwhile, food loss and waste cost the U.S. $1 trillion in economic costs, $700 billion in environmental costs and approximately $900 billion in social costs, according to the report.

Around the world, an estimated one-third of all food produced for humans is lost or wasted — about 1.4 billion tons every year. Food waste is responsible for at least 6% of global greenhouse gas emissions — three times more than that from aviation — and nearly one-quarter of those emissions come from wasted food.

The role of climate change

Species overexploitation, invasive species and diseases and pollution are all considered threats to biodiversity, the report said. However, human-caused climate change is projected to become as, or more important than, other drivers of biodiversity loss in the coming decades.

Climate change creates an ongoing destructive feedback loop in which the worsening climate leads to the decline in genetic variability, species richness and populations, and that loss of biodiversity adversely affects the climate. For example, deforestation leads to an excess of carbon dioxide in the atmosphere, warming the planet and exacerbating forest fires.

Just a handful of countries — Russia, Canada, Brazil and Australia — contain regions without a human footprint. But these wilderness areas are facing irreversible erosion, affecting other species and humans’ ability to adapt to climate change.

According to the report, no part of the ocean is entirely unaffected by overfishing, pollution, coastal development and other human-caused stressors. Humans depend on marine ecosystems to provide food, climate regulation, carbon storage and coastal protection — all of which are affected by these activities and are exacerbated by climate change.

The link between the health of the people and the planet

Between devastating wildfires and the COVID-19 pandemic, 2020 has made it clear that humans and nature have never been more intertwined. The report shows that the natural support for human life is rapidly declining — and that it’s up to citizens, governments and business leaders to come together at a scale never-before-seen to do something about it.

Experts expressed concern that many of the major gains in human health in the past 50 years — such as a decreased rate of child mortality and poverty and an increase in life expectancy — could be undone or even reversed due to loss of nature.

The rate of infectious disease emergence has increased dramatically over the past 80 years — and nearly half of these diseases are connected to land-use change, agriculture and the food industry. One study cited by the report suggests that diseases originating in animals are responsible for 2.5 billion cases of illness and nearly 3 million deaths every year.

“How humanity chooses to recover from the COVID-19 pandemic, and how it addresses the looming threats from global environmental change, will influence the health of generations to come,” wrote Thomas Pienkowski and Sarah Whitmee of the University of Oxford.

What can be done?

Similarly to the economic crash in 2008, lockdowns due to the coronavirus pandemic have reduced humanity’s demand by nearly 10% — a change that experts say is unlikely to last without major structural change.

While the report paints a tragic picture for the future of the natural world, it urges that current trends can be flattened, and even reversed, with urgent action. It emphasizes the need for world leaders to overhaul the food production and consumption industries — taking deforestation completely out of supply chains and making trade more sustainable, among other things.

In just the last year alone, natural disasters, from California’s wildfires to severe droughts in Australia, have cost billions of dollars globally. Experts warn that economic decision-makers need to take into account not only produced and human capital, but also natural capital when crafting public and private policy.

To feed 10 billion people by 2050, humans will need to adopt a healthier way of eating — both for themselves and for the planet. Diet-related disease risk is the leading cause of premature mortality globally and food production is the main driver of biodiversity loss and water pollution, also accounting for 20-30% of greenhouse gas emissions.

Experts recommend humans adopt a diet that consists of a balanced proportion of whole grains, fruits, nuts, vegetables, beans and pulses, with animal-derived products like fish, eggs, dairy and meat consumed in moderation.

The report calls the above changes “non-negotiable” to preserve human health, wealth and security and urges world leaders gathering virtually for the U.N. General Assembly beginning September 15 to address them — only then can humans “bend the curve” of biodiversity loss.

“While the trends are alarming, there is reason to remain optimistic,” said WWF global chief scientist Rebecca Shaw. “Young generations are becoming acutely aware of the link between planetary health and their own futures, and they are demanding action from our leaders. We must support them in their fight for a just and sustainable planet.”