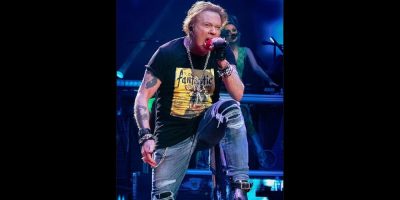 The 30-year tradition of throwing his microphone into the crowd is over for Axl Rose after a woman claims she got two black eyes when it hit her in the face.

The incident happened during a Guns N’ Roses show in Adelaide, Australia, on November 29.

In a statement to an Australian newspaper, the fan explained,

“I was in Diamond Standing, so it wasn’t even right at the front, and it was the very last song, “Take Me Down To Paradise City.” He took a bow and then he launched the microphone out to the crowd . . . and then bang, right on the bridge of my nose. . . . What if it was a couple of inches to the right or left? I could have lost an eye . . . what if it hit me in the mouth and I broke my teeth?

Even though another fan caught the mic, the woman says she was left bleeding from her nose.

Axl has responded to the incident and says he will stop the mic toss.

“If true, obviously, we don’t want anyone getting hurt at any of r shows anywhere. “He added :

“Having tossed the mic at the end of r show for over 30 years, we always felt it was a known part of the very end of r performance that fans wanted and were aware of to have an opportunity to catch the mic. Regardless, in the interest of public safety, from now on, we’ll refrain from tossing the mic or anything to the fans during or at r performances.”

IT WASN’T YOUR FAULT! Please don’t end the tradition, keep playing the microphone, thousands of fans dream of catching it one day. We love and support u! ❤️🌹pic.twitter.com/av65D2tqML

Fans are divided on the issue; many say the tradition should stay.

Others feel it is best to scrap the toss for safety’s sake.