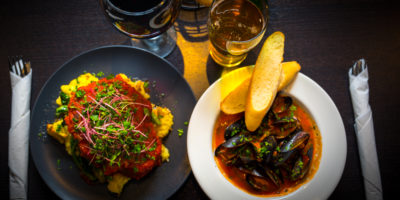 Would you like some soup to go with your snowsquall?

A suggestion to extend the patio season for restaurants until the end of November might have been a crazy thought a year ago, but not in the era of COVID-19 when eating establishments are looking to any lifeline to keep their financial heads above water.

Councillor Keenan Aylwin, whose Ward includes the downtown, has a motion he will put forward at Barrie City Council on Monday that patios at eating establishments be permitted in the City until November 30.

This would include restaurants outside the downtown limits as part of the Patios Everywhere Program.

Aylwin’s motion lines up with a staff report that says if weather conditions include snow and ice, then patios must be removed within 48 hours’ notice from the City.

The staff report says paving as part of the Dunlop Streetscape project is scheduled over the next month and recommends patios downtown remain closed until the paving is complete. If the paving doesn’t proceed now, notes the report, the work will carry over until next spring and downtown businesses will experience disruption against between April and June. The paving is to begin next Tuesday.

Aylwin’s motion asks that patios affected by the paving be permitted to re-open once the work is complete.

He also wants the enforcement of snow clearing downtown suspended until the conclusion of the Patio’s Everywhere Program or the end of November, whichever comes first, though downtown businesses would still be required to remove snow and ice from their properties by 10 a.m. daily as is required in the bylaw.

The Downtown Barrie Business Association (BIA) has been in talks with the City about extending the patio season.

The staff report says once the BIA learned what the impact would be should patios be selected over paving, the organization opted to complete the work so construction in the downtown could end in 2020.

The downtown patio program was extended to October 19 to leverage the Open Air Dunlop pilot project. Three or four patios at the request of the BIA have been allowed to stay open until this Sunday and there will be no enforcement.

To take the chill off, the BIA says some patios have infra ray heat already installed and other establishments are thinking about creative ways to warm up their outdoor space.