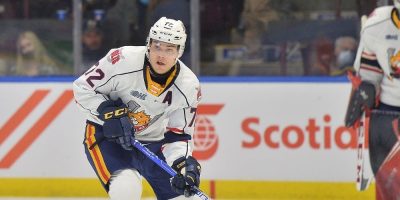 A disappointing effort by the Barrie Colts Saturday night in Mississauga left players and coaches somewhat baffled, but whatever it was they better figure it out quick.

If not, Barrie’s season is likely over on Monday night.

The Colts find themselves on the brink of playoff elimination in their first-round OHL series against the Steelheads after a lacklustre 4-1 loss at the Paramount Fine Foods Centre.

The Colts have gone from an overtime goal in Game 4 giving them a commanding 3-1 series to a loss Monday ending their season.

“Obviously our backs are against the wall now,” said Colts overage defenceman Nathan Allensen. “Do or die from here on in, so we got to get her going. I think the boys will be up to the task.

“We’ve battled through a lot of injuries and COVID and everything this year, so I know this group is resilient and I wouldn’t expect anything else for Monday night.”

Easily their poorest showing of the five games in this series, the Colts showed little jump or offensive drive right from the drop of the puck.

For the fourth time this series, the Steelheads scored first. Only this time, the Colts never really recovered.

“I’m not sure what it was,” said Allensen. “I think we had a slow start and then couldn’t get our feet under us. We had our opportunities, but at the same time didn’t bury them. It’s a thing where you got to bear down.

“You don’t get too many opportunities in playoff games, so when you get them you definitely got to capitalize on them.”

Even the return of starting goaltender Mack Guzda and veteran forward Declan McDonnell to the lineup didn’t spark the Colts.

“It just seems like we didn’t play to win the game,” said Barrie head coach Marty Williamson. “We were scared or I don’t know quite what it was, but we sure didn’t have the battle and the desperation you need to win a playoff game. We got it late, but it was too little, too late. We got to play 60 minutes that way. Every battle, every race has to mean something to us.

“It wasn’t that we gave up that much. Yeah, they got some shots, but we just didn’t generate anything. We just made it way too easy for them.”

Goals by Jake Uberti, midway through the first period, and Chas Sharpe, early in the second, gave the Steelheads a 2-0 lead heading into the third, but the Colts still had time to right the ship.

McDonnell provided hope midway through the period when he spun around at the side of the net and slid it past Steelheads goalie Roman Basran to cut the lead in half.

Four minutes later, though, Zakary Lavoie would restore the two-goal lead and then Innisfil native James Hardie, with his fifth of the series, iced the win with an empty-netter.

“I thought there was a bit of the push in the third,” said Williamson of his club. “I thought we balanced out the game and we did have a push. The problem is when you get behind and you have to push like that it just gets too fine. One little mistake and all of a sudden you’re down 3-1.

“We need to get a lead and play 60 minutes, and have a push in the first period of the game. Not the last 10 minutes of the game.”

The Colts were outshot 15-4 in the opening period and 36-19 overall. Most of those 19 shots came from the outside.

After the last two games of doing a good job creating traffic in front, the Colts seldom got bodies to the net and Basran ended up having his easiest game of the series.

“No bodies to the net at all until the third period when we got a little bit of traffic,” said Williamson. “It’s a want, it’s a will. It’s your best player setting examples. It’s all those things, you can bring out every cliché.”

That is going to have to change if the Colts are going to force a seventh and deciding game Wednesday night back in Mississauga.

“We got to get bodies in front of him and more pucks to the net,” said Allensen. “It’s hard to score goals when we don’t do either of those things. I think that’s going to be the main message for Monday, more energy, bodies to the net and pucks to the net.”

With all the adversity the club has faced with injuries and suspensions in the second half, the Colts have believed all season they are a better team than what they’ve shown.

It’s put up time now or the season is over.

“You can’t have hiccups in your lineup and we just seem to have them all over. We can’t get consistent.”

Barrie can ill afford to sit back and have another slow start.

“We need a two-game winning streak,” said Williamson. “Take one period at a time. If we can win the first period, it would be a good step. That’s what our goal is, to win the first period Monday night.”ICE CHIPS: Both teams were scoreless on a pair of power-play chances. . . Brandt Clarke (knee), Kevin Niedenz, Tai York and Oliver Smith did not dress for Barrie. . . Former Barrie Colts minor midget Hardie now has five goals and six points in the series. . . Barrie’s Connor Punnett and Mississauga’s Evan Brand had a rare playoff fight midway through the first period. . . The series has been as close as expected with Mississauga outscoring Barrie 11-9 through the first five games and both teams being 3-for-12 on the power play.