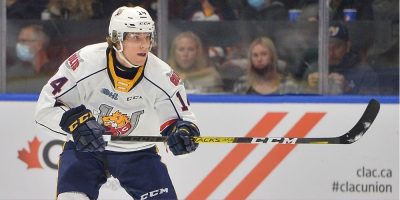 The losses keep piling up for the Barrie Colts and so do the injuries.

The slumping Colts, who added captain Brandt Clarke to a lengthy injury list last Sunday in Peterborough, dropped their sixth straight with a 4-1 loss to the host Owen Sound Attack, Wednesday night, at the Harry Lumley Bayshore Community Centre.

Servac Petrovsky and Cedrick Guindon both scored twice for Owen Sound (33-26-5-3), which moved to within two points of the Guelph Storm for fifth place in the Western Conference standings.

What can go wrong, has gone wrong for the Colts over the stretch drive.

Barrie headed into this final week of the regular season hoping to get some positive momentum going, but instead, it was more of the same.

“We’re obviously limping, but we can’t go up or down where our spot is kind of locked in,” said Colts head coach Marty Williamson. “We know what we’re doing. With these final two games, get some good habits, play hard, play the right way and hopefully we get a couple of guys back and we can get focused on Mississauga.”

Colts defenceman Ian Lemieux knows it’s up to veterans like him to keep the team focused on what has been a really rough last month.

“It’s been really tough on the guys of late,” Lemieux admitted. “I think the thing we got to control is keeping our morale positive in the room and helping the young guys, keeping them positive. Eventually, I think it will take a turn for the good.”

It’s tough when the snake-bitten club just can’t seem to get lucky. Already without starting goalie Mack Guzda and veteran forwards Jacob Frasca and Ryan Del Monte for a lengthy period of time, the club suffered another blow when Clarke was injured late in a loss to the Petes.

With Clarke and Peterborough’s Tucker Robertson pushing and shoving one another, linesman Will Dykeman came in to break up the scrum.

Dykeman pulled Clark aside and then fell on the Los Angeles Kings prospect who landed awkwardly can clutching his right leg.

Williamson said the Barrie captain, who was in obvious pain, is currently listed as day-to-day.

It’s another blow for the Colts who have been without their star goalie. Guzda has only played three times in the last five weeks.

The Florida Panthers prospect just returned from getting an MRI in Nashville and the Colts will find out today where he stands.

Frasca is also set to have another concussion test on Thursday.

“I don’t think it’s positive either one well play,” said Williamson when asked if either one will return this weekend.

Owen Sound broke open a scoreless contest midway through the second on a pair of power-play goals by Petrovsky.

“It’s like a dike, we can’t just seem to fill the holes,” said Williamson. “Our penalty kill had been doing a fantastic job and we just do some things we normally don’t do and give up two goals.”

Barrie outshot Owen Sound 36-25, including 17-10 in the second. They had plenty of chances, but couldn’t capitalize.

The Colts have just eight goals in their last five games.

“We had four two-on-ones and we had our chances and got nothing out of it,” said the disappointed bench boss. “We only got one shot on net, I think, on the four two-on-ones. So, you got to execute when you get those opportunities and the whole game changes.

We could have been up 2-0 rather than down 2-0. It’s a whole different pace to the game, but we’re not scoring and then we’re fragile on defence, and we’re giving up stuff.”

Guindon put the game away with two goals a little more than five minutes into the third.

The Colts have two games now left to try and gain a little momentum heading into the playoffs.

“That’s what we’re trying to get at right now,” said Lemieux. “Just get on a path where we’re rolling and take it into the playoffs.”

Barrie will close out its home regular-season schedule Thursday night against Hamilton.

The OHL’s top team, the Bulldogs have won 11 of their last 12 games.

“They’re doing the right things right now,” Williamson said of Hamilton. “We watched a couple of their games and what I said about good habits that’s what they’re doing. They got a lot of talent, obviously, on that team. You make mistakes, they make you pay right now.

“They’re playing a good game and it’s a good test for us.

ICE CHIPS: The Colts will pay tribute to overagers Nathan Allensen, Anthony Tabak and Mack Guzda before the start of Thursday’s contest. . . . Barrie wraps up its regular season on the road Saturday night against the Niagara IceDogs. . . Colts veteran Evan Vierling has hit a rough patch since returning from the flu. The New York Rangers prospect has just two assists in his last nine games.