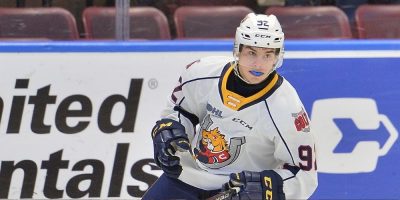 Right now, every game somebody different is stepping up for the Barrie Colts and Marty Williamson doesn’t want it any other way.

“Every night somebody is inspiring this team and that’s kind of the test we wanted,” the Colts general manager and head coach said after his club’s 9-1 romp of the Wolves, Tuesday night, at the Sudbury Community Arena.

“We kept saying whether it’s Mac (Declan McDonnell) making a big hit or JR (Roenick Jodoin) using his speed, it’s been something different every game, so that’s a positive.”

Call it strength in numbers. That balanced attack has Barrie (19-9-3-0) moving up the Eastern Conference standings and that scoring depth was on display in a big way against Sudbury (12-21-3-1).

All nine goals had a different name beside them on the scoresheet.

And this was after the night got off to a rough start when Barrie lost forward Ryan Del Monte to injury on the opening shift.

“I was wondering if it was going to be one of those nights,” Williamson said. “Then we get (MacDonnell) with the big hit and they jump him and take a penalty, and we score on the power play. We did some real good things.”

“Right from top to bottom, I thought every guy contributed. It’s a good win.”

And it moves the Colts to within three points of North Bay for third place in the Eastern Conference standings. Barrie also holds seven games in hand.

The Colts jumped out to a 2-0 first-period lead on a power-play marker by Tabak and a beautiful individual effort by McDonnell in the final minute, but more importantly the strong start showed there’d be no taking a rebuilding Wolves team lightly.

“No we didn’t,” Williamson said. “That’s why I said after the game (to the guys) the score was because we were prepared to start the game. We didn’t give them anything good to feel about. We came in and played well right from the start of the puck and that’s a good sign.

“(Mack) Guzda made a couple of saves for us and we had a couple of hits and we wanted to be physical and we kind of did the things we wanted. We got rewarded with a 2-0 lead and kept playing that way and we were able to blow it open.”

Did they ever in the second period.

The Colts exploded for six goals and outshot Sudbury 23-4 in a dominant 20 minutes of play.

“We felt really good after the first and it gave us a real good feeling going into the second period,” Williamson said. “We just did a lot of little things right. We backchecked. We look at all the offence and a lot of it came off real good defensive plays.

“Our young guys, that’s what we’ve been really pressing them on. To get our numbers back and don’t turn the puck over and good things are going to come. And we got rewarded in the second period, that’s for sure.”

Youth, Williamson said, has served the Colts well. Despite having traded away veteran scorers Oskar Olausson (Oshawa) and Nicholas Porco (Owen Sound), the Colts offence has hardly skipped a beat.

“No, we haven’t,” the Colts coach said. “We believe in these young kids. When (Colts owner Howie Campbell) and I sat down, we just said we’re not going to move them. We’re invested in them. I thought JR has come up and given us a heck of an effort, we’re seeing Tai York grow. Cooper Matthews getting more ice time. You know, we’re just big believers in them.

“We kind of said we want to get a core of our guys that have been drafted and we don’t have to trade for everything. There’s going to be a time next year or the year after where we’re going to make some big moves, but I think we made the right moves. My gut was to stick with these guys and see how the season plays out.”

Tuesday’s win kicked off another busy week for the Colts, who host Owen Sound on Thursday and then hit the road on Saturday for weekend games in Sault Ste. Marie and Sudbury.

Barrie will be looking to avenge last week’s one-goal loss to Owen Sound.

“It was a tough 3-2 game and I don’t know if we’ll have (Del Monte) back, so we’ll throw another young guy in there in Ben Pickell,” Williamson said. “We just keep growing. We’re going to have some rough nights at times, but I just love the determination of our young guys.

“I really think it’s made it infectious for our older guys. We’re having a lot of fun. We’re a good group.”

ICE CHIPS: Nick DeGrazia had the lone goal for the Wolves, who were outshot 45-25 by Barrie. . . Del Monte, who left the game early after a hit in the corner, was expected to be taken to the hospital once the team returned to Barrie. “It’s going to take a week or so before we can get him back,” Williamson said. The Colts are already without forward Jacob Frasca (shoulder) and rookie blue-liner Beau Akey (illness). . . Vierling had three points (1G, 2A) to lead the Colts. A total of 10 Barrie players recorded two points in the win. Only four Barrie players failed to hit the scoresheet. . . Ethan Cardwell’s two assists extended his scoring streak to seven games (5G, 8A).