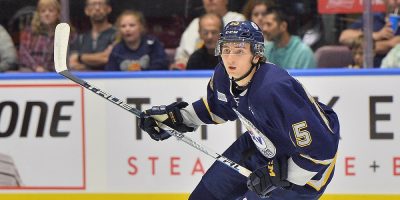 Hockey is back in Barrie today.

After the COVID-19 pandemic wiped out the 2019-20 playoffs and then the entire 2020-21 season, the Barrie Colts finally return to the ice at Sadlon Arena, Monday, to kick off their 2021 Training Camp.

While COVID-19 restrictions won’t allow for the attendance of fans at this year’s camp, there’s no shortage of excitement among the players and coaching staff that they can finally get back to the game they love.

With the pandemic still forcing restrictions and hanging over everything being done, it promises to be a camp unlike any other.

“It really is,” Williamson said. “We’re still going through it with COVID and there will be some restrictions of some things. Still, it just feels like getting back to normal a little bit.

“We’re so excited to get back to normal, that’s a good thing to say right now because it’s a crazy time.”

“That’s why I can’t wait,” Williamson added. “I know talking to the players they just can’t wait to get into camp and get on the ice and be around their teammates and learning from the coaches.”

Along with several new faces on the ice, there are also some new faces, even if familiar ones, on the coaching staff.

Williamson, who was behind the Colts bench from 2004 to 2010, takes over for Dale Hawerchuk who sadly lost his battle to cancer last August.

Williamson, who recently moved his family back to Barrie, admits he can’t wait to be back on the ice.

“It feels fantastic,” he said of his return to the Barrie bench. “I was at a golf tournament with my son (recently) up in Trenton and I had 50 people come up and congratulate me. It says a lot about the organization and the pride you have to have a job like I have.”

“We’re excited. We have lots of friends up in Barrie, who have already reached out to my son and wife welcoming us back, so it’s an exciting time for us. I love the OHL, I love the league. Barrie gave me my start, so it’s fun to be back in Barrie and have that logo on my chest.”

While there’ll be plenty of tough decisions to make with two rounds of draft prospects and a large group of returning players, there’s no bigger question heading into this year’s camp than goaltending.

Artus Silovs has moved on to pro hockey in the Vancouver Canucks system, but the biggest surprise came when veteran Jet Greaves signed a two-year AHL contract with the Cleveland Monsters.

That left a team many expect to contend for an OHL championship with no experienced goaltender.

“100 per cent it’s the most uncertainty we have,” Williamson said of the goaltending situation heading into camp. “We don’t have a proven goalie. As much as we loved Jet and we really believed he was going to be a top-five goalie.”

The Colts believed the goaltending would be solid with Greaves heading up a crease with Matteo Lalama or one of the other goaltending prospects backing him up.

“The uncertainty there is we don’t know if Lalama can do the job,” Williamson continued. “We don’t know if some of our young guys are ready to step in. The guy (Matteo Caruso) we just drafted, that’s a lot to ask for those guys.”

Williamson said the team plans to add one or two veterans off the waiver wire and let them come to camp and battle it out. The club does have Tanner Wickware, who they picked up in a trade from Guelph two years ago as well.

“If that’s not good enough, obviously through the year we’ll look at making adjustments if they can’t get the job done,” he said. “I think getting at least one experienced goalie added to our roster is an important thing for us moving forward.”

It wasn’t too long ago a young goalie by the name of Mackenzie Blackwood came into camp and stole the starting role and Williamson would love to see that. Still, despite the big question mark, he’s confident they’ll be in a good position.

If not, they have plenty of depth and draft picks to go out and make a trade for a goalie.

“We’re going to have a rock-solid defence and we know we’re going to score goals, so I think we can be patient,” Williamson said. “I do want to add a guy with some experience.

“Obviously it’s the same boat. Are these guys top five goalies that we’re adding? If they’re not and the backup can’t do it then we’ll make adjustments as the year goes on.”

Up front, the Colts have plenty of scoring punch and shouldn’t have a problem scoring, especially if the Flyers return leading scorer Tyson Foerster to Barrie.

Williamson is excited about Jacob Frasca and his ability to become one of the better two-way centres in the conference, while 2020 first-rounder Hunter Haight made quite the impression this summer at Hockey Canada’s under-18 team summer development camp.

“There’s going to be a lot of tough, tough decisions there,” he said. “We’re deep at forward, there’s a lot of good players there, and again we saw five games of Oliver Smith and we sure liked what we saw. Frasca, Del Monte, there’s so many of them.

“We know there are guys that are for sures like Cardwell and Vierling and so many of them, but it’s going to be real interesting to see where this other group is at.”

The club believes they have a budding star in offensive defenceman and 2021 ninth overall pick Beau Akey, while third-rounder Grayson Tiller and his physical style will get a long look.

“Even the guys we traded for like Punnett, Sredl and Lemieux and guys like that it’s going to be interesting to see where their development is at,” Williamson said.

“There are (a lot of tough decisions) and (camp’s) where we’re going to get a real feel for this group,” the head coach added. “There’s guys there that we saw play almost two years ago and that’s a lot of time. We know these are critical ages for these guys.”

With a lot of new faces, on and off the ice, building team chemistry will be a focus for Williamson. With COVID having wreaked havoc over the last year-and-a-half, this year’s camp will be longer than most with Barrie’s opening game against the Niagara IceDogs not scheduled until Oct. 7.

Williamson hopes that will be plenty of time to shake whatever rust is there and build a cohesive unit that he believes could make for a fun, exciting year for Barrie fans.

“It’s a different year, different coaches, the team is going to have a different makeup of six to eight guys that haven’t played in the OHL,” he said. “I think it’s going to be important for the leadership group and the veterans to grab a hold of this team and show the path.

“At a point, it’s back to work. It’s the excitement of hockey and then learning the hockey. As much as these guys have been playing it all their life, it’s one thing to learn about being a group and team and doing everything the same and being successful that way.”

ICE CHIPS: After medical reviews and practice on Monday, the club is scheduled to do fitness testing on Tuesday morning before some late afternoon scrimmages. The scrimmages continue on Wednesday with the annual Blue and White game on Thursday night where the club is expected to make several cuts following the contest. . . Clarke “thrived” at Kings development camp recently, while Cardwell also got to show his game at San Jose Sharks development camp from Aug.16-19. . .Foerster is at Flyers development camp to Sept. 1 and then likely off to main Flyers camp before the NHL club makes a decision on his future. . . The Avalanche haven’t decided whether Olausson will head to Colts camp first or join the team when they open their NHL camp later in September.