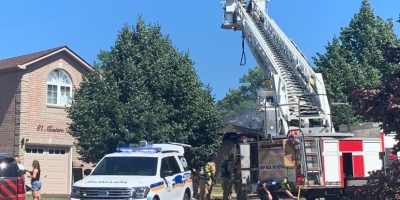 Barrie Fire Chief Cory Mainprize told Barrie 360 on Monday morning that a family was inside the home at the time and all occupants were able to safely exit.

According to Mainprize, the cause of the fire – including the presence of working smoke alarms – is being investigated Monday.

Mainprize says the damage was significant to both houses, and the residents will not be able to return to their homes for some time.

He noted that damage estimates will be available later Monday.

Barrie Fire says it’s believed the fire started in the garage of one of the homes and then spread to a second residence.

The homes are on Masters Drive off of Hanmer Street East near St. Vincent Street.

There have been no injuries reported. The cause of the fire is unknown.