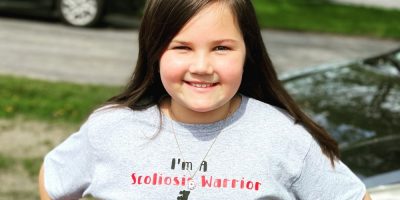 What’s the first thing Lilly Collingbourne wants to do once she’s cleared to play sports? “I’m trying out for Wipe Out!”

Early in May, 9-year-old Lilly became the youngest person in Canada to undergo spinal surgery for scoliosis called spinal tethering. The surgery is similar to putting braces on your teeth, except for your spine. The tether gradually pulls the spine straight as the child grows.

Lilly travelled with her family to Ottawa for the surgery. The entire process was difficult, not only physically but emotionally. “Lilly was so scared before the surgery, she was shaking uncontrollably and kept breaking down,” her mother, Samantha, told Barrie 360. “It was tough to not just break down with her because I was just as scared, if not more. I cried with her for a bit and told her it was ok to be scared and that it’s normal”

Because of COVID-19 protocols, Lilly’s dad, Justin, and her sister, Ellis, had to wait in the car. They wouldn’t leave the parking lot all day; they promised Lilly they’d be right beside the hospital to support her. Lilly’s surgery took a total of 6 hours. “The surgeon finally showed face and my body was flooded with relief by the look on his face,” says Samantha. Lilly’s surgery went very well – the curve in her spine was reduced from 55 degrees to 32 degrees. The surgeon was tempted to tighten the tether further, but because of Lilly’s age and how much growing she has left to do, he didn’t want to risk the tether over-correcting the curve.

While the surgery was a success, recovery presented further challenges. “When I woke up, I had no idea what was happening,” said Lilly, “I had a chest tube and that was the most painful part.” During surgery, Lilly’s lung had to be collapsed in order to complete the procedure, and as a result, she had quite a bit of fluid in her lung once it was reinflated. Lilly didn’t have much energy to cough the fluid out, so she was on oxygen a little longer than expected. “Everything was really hard at the beginning. Even just sitting up, or taking some steps. I couldn’t even lift my arms up” Little by little Lilly felt stronger, and eventually, all the tubes and wires were removed.

She was able to head home with her family three days post-surgery.

Lilly’s recovery has continued very well at home. She still experiences soreness but is able to manage it with basic over-the-counter pain relievers like Tylenol or Advil. Most of her discomfort now is her muscles adapting to realignment, as muscles that weren’t being used before are now getting more movement. One unexpected side effect of the surgery? “I grew one and a half inches!” Lilly told Barrie 360.

Lilly still has a long road ahead of her. It will be 6 weeks before she’s cleared for ‘vigorous activity’, but once she is, Lilly has one item at the top of her list. “I want to jump in the pool,” said Lilly. “My grandma is getting a pool, and right now I can only put my feet in. But soon I’ll be ready to do a cannonball.”

The chance for Lilly to live a more normal life, without back braces or casts or missed opportunities, is exactly what her mom hoped the outcome would be. “We hope her back can get stronger and support her enough to stand, walk and run to wherever life takes her,’ said Samantha, “most of all we hope for Lilly’s overall health and happiness.”

Because Lilly is the youngest person in Canada to undergo this procedure, her results will be studied for years to come, meaning her surgery could potentially help other kids who are battling scoliosis.

Lilly was blown away by the public support she received after speaking to Barrie 360 ahead of her surgery. “I thought if somebody sees ‘scoliosis girl’ they wouldn’t want to read it,” said Lilly, “so it’s pretty nice to know that people know about me and about scoliosis. I felt pretty special”