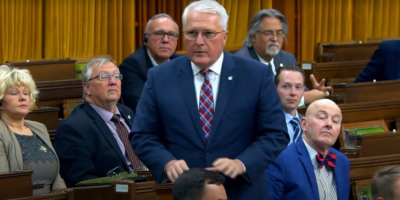 Barrie-Innisfil’s federal representative was asked to withdraw some remarks during Question Period Tuesday, after his words were deemed anti-Semitic by the liberals. Brassard refutes that claim.

Brassard is accused of yelling the name “George Soros” during Question Period at the House of Commons. Soros has long been connected to anti-Semitic conspiracy theories, including unfounded claims that he is funding the ANTIFA movement and Black Lives Matter protests. The comment was made while Deputy Prime Minister and Finance Minister Chrystia Freeland was responding to a Finance Critic query about the federal government’s economy stimulating plans. Freeland has had previous contact with Soros, including writing about the financier and philanthropist during her career as a journalist.

“There was nothing in what I said that was in any way anti-Semitic,” said Brassard after being asked to withdraw his remark. “I’m not going to sit here and take what they’re doing in this situation lightly.”

Omar Alghabra, Parliamentary Secretary to the Prime Minister, was the one to raise the point of order and call for Brassard to withdraw his remark. Alghabra pointed out the last time a Conservative MP invoked Soros’ name; she was called to task on it. “Two or three months ago, when a Conservative Member of Parliament on Twitter tweeted about far-right, anti-Semitic conspiracy theories about the relationship between George Soros and our deputy prime minister, she apologized and deleted the tweet,” said Alghabra. “So, you can understand why I was surprised when I heard a Member of Parliament here in the chamber today, repeated and peddled the same conspiracy theory again.”

Barrie 360 has reached out to Brassard’s office for comment and have yet to receive a reply.