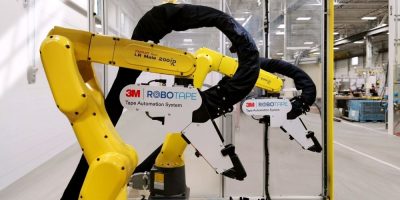 Barrie’s Innovative Automation is making strides in the world of innovation with their “RoboTape” contraption, and even piqued the interest of industry leaders like 3M.

RoboTape is a robotic system for the application of adhesive line products for automotive, architectural, and consumer good manufactures.

Anything from velcro to felt tapes, foam tapes, and double-sided tapes, RoboTape can stick it with precision.

Michael Lalonde, President of Innovative Automation, says it’s special that a Barrie company is showing they can make a print in the technology realm.

“We have always been a world-class company with world-class people,” Lalonde told Barrie 360. “The world just didn’t know it.”

The world needs innovators, and Innovative Automation is at the forefront of that wave with its in-house creation.

How it came to be

Lalonde led the initiative to create a research and development department at the company, which under his direction saw the creation of RoboTape – their first patented product.

The invention was created at the end of 2018/beginning of 2019, and the first units went into production in June of 2020.

The Innovative Automation president says he and his team came up with the idea by branching off, and building on, what they already had.

“Our core business is custom machine building, and we had done several custom machines applying a foam tape,” said Lalonde. “From that, the account manager and myself were just brainstorming one night and had the idea that perhaps there was a better way to do this robotically.

“When we started our [research and development] department, we thought this is a great project to tackle. And instead of a custom, one-off, machine, we set out to produce a highly refined off-the-shelf offering to do tape application.”

Lalonde and his team saw an avenue that needed addressing – with manufacturers facing labour challenges – so they came up with a way to increase production efficiency.

After its creation, the company made a YouTube video of the product, and it caught the eye of some big companies.

“3M saw our YouTube video, they were actually seeking a company to collaborate with,” said Lalonde. “And so, we’ve worked with 3M to create a second version of the product that’s been optimized for their VHB tapes. Now we’re attending trade shows together.”

When asked where and how far he thinks RoboTape can go, Lalonde says things are going to ramp up quickly as they’re seeing lots of interest.

“It’s growing rapidly,” said Lalonde. “Sales are increasing month over month, we’re even selling to Japan. And so we see this eventually growing to be as big as Innovative Automation. We project even within three years that we’re going to need at least 50 people, new engineering and skilled trades positions to be filled to support the demand.”

He noted that RoboTape is helping drive an increase in their core business, but is also allowing them to reach new markets like the aforementioned Japan, and soon the European market.

What RoboTape can do for the community

Lalonde says RoboTape is huge for Barrie on multiple fronts, including potential jobs, but also to show the world that great things come from this community.

“It’s not just Innovative Automation that’s doing great things in Barrie,” said Lalonde. “There’s a lot of companies doing some innovative things on the world stage and I think it’s important for people to know, and it’s our opportunity to give back to the community by creating local, great paying, high skilled jobs.

“I am so proud of our team for creating this world-class cutting-edge technology that will increase our global exports, and allow us to enrich our local communities.”

Innovative Automation is currently hiring for many positions, check out their website for more details.