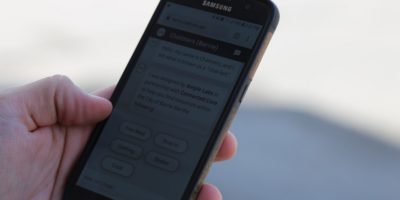 The City took the wraps off a new tool designed to make it easier for folks to find the social services they need.

Chalmers is an online chat-based app that provides its users instant information on services such as housing, food, clothing, and even job assistance. And it works anywhere in the city. “Basically it geo-locates to where you are when you access through your mobile device, and then it’ll tell you the closest service for anything you’re looking for.” says Sam Docherty, Program Coordinator with Connected Core.

“One of the challenges I’ve heard from people who work in the Social Services world is that different agencies aren’t super connected.” says Barrie Councillor Keenan Aylwin “so this is a great way to bring that all together, so we have a central database and resource for everyone to access.”

While it is being called an app, it isn’t one you could download from an app store like iTunes or the Google Play store; it’s web-based, and that’s by design. “We want marginalized people to be able to access it really quickly with low barriers. In the app store, you’d need to have an Apple ID which requires a credit card, and that would just be a barrier.” says Andreea Campobassa with the Shift Government Project.

Chalmers came about through a partnership with the City of Barrie, the Mayor’s Office and its Shift Government initiative, the Barrie BIA, the Barrie Police Service, and various social services in the area.