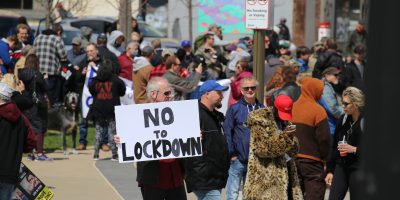 Jeff Lehman believes the messaging has been lost.

The Barrie mayor told Barrie 360 when the weekly protests at Meridian Place began seven or eight weeks ago there was a number of small business owners who attended.

“It was actually organized by a woman who runs a small business in Barrie,” said Lehman. “There were a lot more masks and there was a very focused message that was against restrictions on businesses.”

The mayor said he can totally understand that cause and understands that people don’t like the lockdown, but Lehman added the protests have changed into something quite different.

“This is anti-vax, anti-government and anti-everything. We are obviously concerned about the message that conveys. This is not a whole bunch of very small businesses gathering to protest.”

The mayor claimed more than half the people at the demonstration on Saturday were from out-of-town, and although he did not offer proof, Lehman said they had pretty strong evidence.

There are no plans to close Meridian Place with fencing or barricades. Lehman said it would not be a very effective solution for a whole bunch of reasons.

“I think the protesters might just move elsewhere or they might try and take it down, or whatever.”

He said the city was working with police to try and dissuade people from gathering.

The mayor also expressed frustration with the rollout of lockdown regulations from the province.

On Friday evening, the city released a statement in response to the additional stay-at-home order measures announced late that afternoon by Premier Doug Ford.

“All City of Barrie municipal playground equipment, waterfront fitness equipment, skateboard parks, tennis courts, basketball courts and picnic areas/pavilions will be closed to public access. Meridian Place in downtown Barrie will also be closed to the public. Signage will be installed as soon as possible.”

Asked why Meridian Place was not closed, Lehman said city officials really had their first chance to look at the regulations on Saturday, noting the premier walked back the playgrounds piece and allowed them to reopen.

Police estimated between 400 and 500 people attended Saturday’s lockdown protest, which was attended by People’s Party of Canada leader Maxime Bernier.

“At the moment our take on it is that it’s probably as a park not closed, but you are supposed to close amenities within a park. We’re trying to figure this out ourselves,” explained Lehman. “It’s a little bit up in the air, even as to what the provincial order requires in terms of whether Memorial Square and Meridian Place can stay open.”

He said the irony is the protesters claim to be anti-lockdown to support small business and yet they are actually hurting them.

“There was a letter posted by a number of those businesses, four or five of them, within five or six doors of Meridian Place that said they were going to have to close because their customers were concerned about the protesters.

Eight people including the event organizer were issued tickets by police for being in violation of public health restrictions.