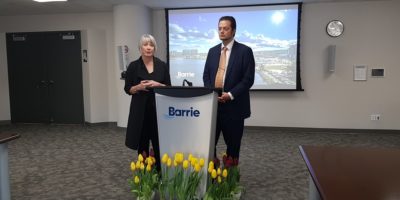 Barrie’s mayor says there’s no comparing last week’s provincial budget with that of the feds.

Mayor Jeff Lehman met with Federal Labour Minister Patty Hajdu for a breakfast chat about the federal budget, and took time to highlight some of the benefits to Barrie residents to media.

In the federal budget, Lehman says there’s a level of trust not seen in the provincial one, “When you’re senior government, there’s lots of ways you can give municipalities money. You can set up a program and say ‘you get money for this, and if it’s not this, you’re not getting the money.’ Or You can say ‘we’re going to trust you to know what’s important in your community’ and just give you the funding, and trust that you’ll do good things with it.”

Council has allocated $3.5M of additional gas tax funding towards road resurfacing. We are escalating the war on potholes!

Lehman highlighted the recently announced increase in Gas Tax funding from the federal government, with no direction on how the funds should be spent. Some of the over eight million dollars was last night allocated towards road resurfacing and pot hole repair.

The provincial budget was criticized by Deputy Mayor Barry Ward for being tone-deaf to the needs of municipalities.