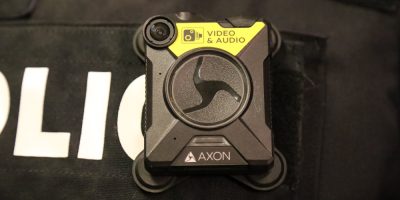 More transparency and public confidence have been key benefits of body-worn cameras used by about 150 front-line police officers in Barrie.

Launched as a pilot project involving 25 frontline officers from October 2020 until February 2021, the training and full roll out took place last September.

“It’s well worth its weight in gold,” says Staff Sgt. Dave Goodbrand. “We can’t have a better community if there is no transparency between Barrie Police Service (BPS) and our community. There are a lot of armchair quarterbacks out there that say everything we are doing is wrong, but I think people forget there are many, many things we’re doing right and these (cameras) definitely capture the moment.”

His comments come as South Simcoe Police (SSP) launch a pilot this week until the end of August where 16 frontline officers will be equipped with body-worn cameras.

Goodbrand says there has been strong support for the cameras from BPS frontline officers.

“It’s given us more transparency in the public,” he notes. “But we’re seeing other benefits as people treat us differently when they’re on camera.”

Goodbrand says civility toward police is much improved because people realize officers are recording what is occurring.

The cameras have also been a big help in the investigative process.

Goodbrand says the cameras protect police and the public from false allegations.

Police will record all investigative interactions.

The cameras can also be triggered, says Goodbrand.

“So, if an officer draws their sidearm, it will trigger the camera, or when an officer powers their taser or activates lights in the cruiser. If there is a loud bang similar to a gunshot, the camera will be triggered.”

It’s estimated the cost of body-worn cameras is about $1.9 million over nine years.