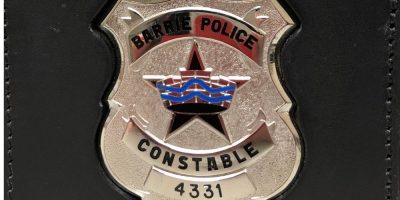 Barrie Police say they were made aware of a traffic stop that occurred on Livingstone Street East, north of Cundles Road East on Saturday, June 18.

The incident happened between 7:30-8:00 p.m. near a driveway to a nearby church.

Officers say this information was relayed to police after details were posted last Thursday regarding a male who used what is believed to be a fake badge to identify himself at a collision on Yonge Street, near Little Avenue on June 22.

Police say the traffic stop involved what is described as an older model police car that was black on the front, and rear, with a white door that had the letters OPP.

The mid-size Chevrolet was equipped with a roof-mounted lighting system that is described as an older style, with a box-like shape. This light bar was close to the front windshield and not mounted in the centre of the roof.

Officers say the driver is described as approximately 40-47 years old with black or brown shaved hair, possibly eastern European (with no accent), dark eyes, clean-shaven, a slim build and a circular face. He was wearing a deep green shirt (possibly a t-shirt) and green tactical like pants and tall black boots.

Polic confirm the traffic stop did not involve anyone from the OPP, and that OPP did not have any calls for service involving the complainant’s vehicle.

Barrie Police say they do not believe these incidents to be related, but are warning the public of this male who acted in an aggressive manner.

Anyone who may have been on Livingstone Street East and either witnessed the traffic stop or may have dash cam video, is asked to contact Barrie Police at 705-725-7025, extension 2731.

Barrie Police is reminding the public that motorists should always lock their doors when travelling in their vehicle. If you are ever in doubt that you are being stopped or approached by someone who is not a police officer, then dial 911 immediately to confirm the validity of the interaction.