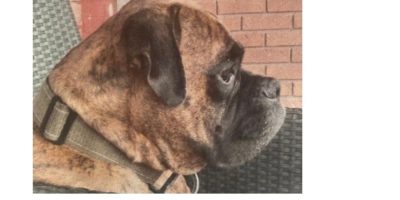 The German Boxer dog was stolen from its home on Orwell Crescent on November 23.

Barrie police confirmed in a tweet on Wednesday afternoon that the dog has been located and returned to its owner.

Great news from #BarriePolice! Frazer the German Boxer dog that was stolen last Tuesday has been located and returned to his owner. Investigation is ongoing – update to follow when the investigation permits. #CommittedToOurCommunity pic.twitter.com/ZsRFUtFYGC

Police spokesman Peter Leon told Barrie 360 the dog was located in Barrie, though he could not go into specifics due to the nature of the investigation.

Investigators have said the dog was ‘forcibly removed’ from the residence.

On Tuesday, police said their investigation had identified a number of people who are being sought.

During the theft, a neighbour who was outside heard the ruckus, and he ran toward the car to attempt to intervene, but the car fled, and the person was dragged. Luckily, the individual sustained non-life-threatening injuries.

The vehicle is a black Honda Civic.

At the time, police said they were looking for two women and a man.