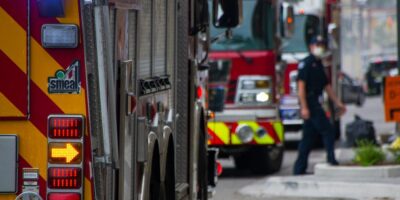 Barrie Police are probing a suspected arson in the city’s southwest.

At about 1:30 a.m. Wednesday, April 7, homeowners were awakened after hearing a loud noise in the backyard, at a home on Columbia Road, near Athabaska and Essa Roads. When they went to see what happened, it was discovered the home’s BBQ was knocked over and that the deck cushions under a gazebo were on fire. Flames quickly spread to the rear of the home.

Barrie Fire responded and immediately knocked down the fire, but not before it did significant damage to the rear of the home, along with the deck and gazebo. The home also sustained significant smoke damage.

The Fire Marshal’s Office has since determined the fire was intentionally set. Police have begun an arson investigation and ask anyone with information to contact Detective Constable Duncan Watson at (705) 725-7025, ext. 2755, or via email at dwatson@barriepolice.ca. Remain anonymous by contacting Crime Stoppers at 1-800-222-TIPS.