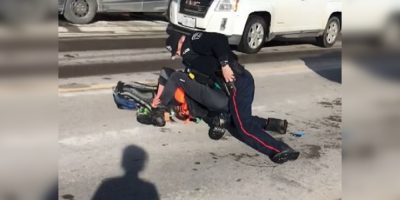 A Barrie Police officer has been charged in connection to an arrest caught on camera and widely criticized on social media.

The OPP confirmed on Thursday that an officer, a 46-year-old man, has been charged with assault and assault with a weapon following the February 4 arrest of a 20-year-old man in downtown Barrie.

Several videos of the incident surfaced after the arrest showing a young man being struck and forcefully thrown to the ground during his arrest. The OPP was called in shortly after to investigate the circumstances surrounding the video.

“The need for transparency in policing is critical. The Barrie Police Service holds all its members to the highest level of professionalism. I thank the OPP for conducting a thorough and detailed investigation,” says Barrie Police Chief Kimberley Greenwood.