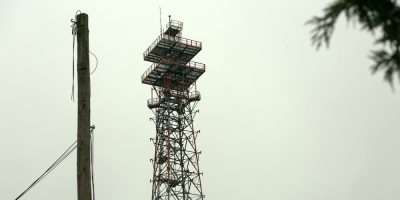 The Barrie Police Service was handed a chance to test out some recently-learned skills following reports someone had climbed the old Bell broadcasting tower off Beacon Road.

The call came to first responders shortly after 6:30 a.m. Thursday, of a man who appeared to have climbed the tower. Both Barrie Police and the Barrie Fire Service responded to the call.

The fire service brought its proven high-angle rescue team to the scene, while the Barrie Police Service brought some recently trained officers. “We recently had a number of our tactical officers trained in rappelling and whatnot,” Barrie Police spokesperson Peter Leon told Barrie 360. “They were able to put a lot of practical experience to use. You know, we train for days like this.”

Leon says authorities on the ground were able to communicate with the man via cellphone, and he eventually started coming back down. He was met partway by rescuers and put into a safety harness to be brought down the rest of the way.

As for why the man climbed the tower in the first place, Leon hopes that will be revealed soon. “That’s something that we’re certainly trying to get to the bottom of. We do have an ongoing investigation with regards to the events that happened quite early this morning.”

The 34-year-old man was taken to RVH for assessment.