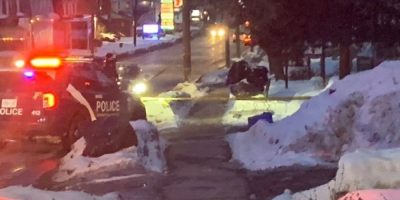 Barrie Police have issued a warrant for 18-year-old Zia Mohammed Chaudhry in connection with a double shooting that happened on Tuesday, Feb. 15.

Around 5 p.m., officers were called to a home on Bayfield Street, just south of Grove Street.

Chaudhry is wanted on charges of attempted murder, discharge a firearm with intent, and two counts of aggravated assault.

He is described as having a brown skin tone, approximately 5’10” tall, 180 pounds with a thin build, straight black hair, and brown eyes.

Chaudhry is known to frequent Barrie and Toronto. He is considered armed and dangerous, and members of the public are advised not to approach but to call the police if he is spotted.

A resident who lives at the home on Bayfield Street told Barrie 360 shortly after the shooting that it was around 5 p.m. when he heard “a whole bunch of yelling” coming from the upper level for about 20 seconds and then a bunch of pops.

“I was like I hope that wasn’t gunshots, but when I looked out the kitchen window, there was a guy crawling on the ground spewing blood on the snow.”

Two men were airlifted to a Toronto hospital with serious injuries.

Police say the investigation remains ongoing, and investigators are asking anyone who may have information or who may have been in the area around the time of the shooting to reach out to Barrie Police at 705-725-7025 Ext. 2131.