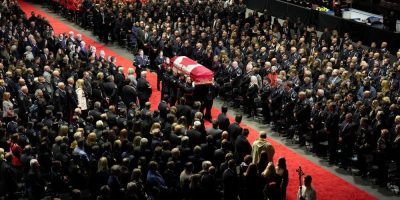 Two officers who died after a shooting in Innisfil were remembered Thursday as respected and dedicated to their careers, while those gathered at their funeral reflected on the risks of the job in light of a string of police deaths that’s shaken forces across the country.

Const. Morgan Russell, 54, and Const. Devon Northrup, 33, of the South Simcoe Police Service died last week after responding to a call about a disturbance at a home. The province’s police watchdog has said neither officer drew their firearms before they were shot.

“They were both brave and dedicated men who gave their lives to protect our community and we will never have the chance to thank them,” acting police chief John Van Dyke told mourners at the Sadlon Arena in Barrie where the funeral was taking place.

Russell, a 33-year veteran of the force, was a trained crisis negotiator, while Northrup was a six-year member who worked with the community mobilization and engagement unit and served as a member of the mental health crisis outreach team. Both officers died in hospital after the shooting.

Russell was a part of the force’s history, Van Dyke said, noting the officer had the opportunity to retire three years ago but chose to keep working in the job he loved. He was a “mentor to many,” Van Dyke said, and helped with recruitment for the next generation of officers.

Northrup came from a policing family, Van Dyke said. Both his parents were retired RCMP officers, and he had recently found love with his partner Annie, who was also a member of the small, tight-knit South Simcoe Police Service.

“They both shared a dry sense of humour and loved a good laugh,” Van Dyke said of the two officers who died. “This loss is deeply personal.”

Thousands of uniformed police officers and emergency responders from across the province, along with the officers’ families and public officials, attended the service.

Bagpipes played as pallbearers carried the officers’ caskets to the front of the venue, where flowers and portraits of Russell and Northrup were on display. Folded Canadian flags and police caps were placed on top of the caskets.

The gathered mourners stood and saluted for a performance of O Canada, followed by a moment of silence.

Lt.-Gov. Elizabeth Dowdeswell opened the service with remarks about the two men, saying she had spoken to their colleagues about reflections that “leave no doubt that they were admired, valued and will not be forgotten.”

The Special Investigations Unit, which is investigating the Innisfil shooting, has said the two officers were shot by a 22-year-old man, who died after an exchange of gunfire with a third officer who was not injured.

The two deaths mark three officers shot dead in Ontario in a month after the fatal shooting of Toronto Const. Andrew Hong in Mississauga in mid-September.

Dowdeswell noted the string of deaths, saying the recent months have been “a devastating time for police and emergency services.”

“Perhaps we don’t say it often enough: thank you,” she said.

Premier Doug Ford, who became emotional at times as he spoke at the funeral, also noted the recent losses among police.

“We have seen too many days recently when these heroes didn’t return from their shift. That hits home,” Ford said.

“This police family will endure. I know you will continue to serve and protect this community with pride and purpose … You will do so with two guardian angels smiling down on you.”

The funeral also comes two days after RCMP officer Const. Shaelyn Yang was fatally stabbed in Burnaby, B.C., during an altercation at a homeless campsite. Yang was a mental health and homeless outreach officer.

Earlier Thursday, uniformed officers had lined the streets outside the arena to salute the funeral cortège as it passed. Community members also gathered at the side of the road to watch and pay respects.

Officers from Toronto, South Simcoe, York Region, and Barrie police services along with hundreds of RCMP and other police force members joined the procession that began after 9 a.m. and moved through snowy Barrie streets as solemn music from bagpipes and drums filled the air.

In Innisfil, a short drive from where the funeral was taking place, a group of residents gathered at the main worship room at a local church to watch a livestream of the service.

People were also invited to watch the service at the St. John’s Presbyterian Church in Bradford, Ont.