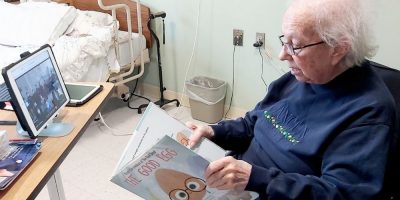 Virtual Story Time is where a resident of IOOF reads an age-appropriate children’s story to a group of students virtually on a platform like Zoom or Google meet.

Cara Chimienti, Recreation Facilitator at IOOF Seniors Home Inc, says the intergenerational initiative was sparked due to residents not being able to see their grandchildren because of COVID.

“The joy kids bring to our seniors is just remarkable,” Chimienti told Barrie 360. “So, I thought this might be a good idea, and mutually beneficial.”

After the book is read, students get an opportunity to answer some questions regarding the story. They can also ask the residents about their life, and what they liked to do when they were the participating children’s age.

Chimienti says the program started with several of the retired teachers who live in the long-term care section as the readers, but they’ve expanded to involve any resident that’s interested – approximately 12 seniors have taken part.

She also noted that Virtual Story Time has now been booked by around ten different schools ranging from Bracebridge all the way down to St. Catharines.

So far, all of the books used have been donated or loaned, and they’re approved in advance by the teachers.

“They’re all very short stories, picture books, because right now we go from junior kindergarten to grade three,” said Chimienti. “We also need to have larger print to make sure all of our residents can see the words.”

The program has an interactive element to it and because of that, the recreation facilitator says there have been a lot of educational opportunities.

She also says the program has introduced new vocabulary and definitions of larger words to the children. Some would ask the residents what they did for a living, some answers were accountant, and pneumatic or hydraulic press operator.

“It was really nice to hear all the questions that the children had, but also all the responses that our seniors had,” said Chimienti. “And they actually got to impart wisdom.”