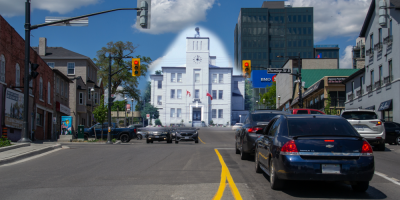 Whether you have some city-related business to take care of or you’re just dropping by for a relaxing winter skate, if you call Barrie home, you’ll no doubt be familiar with City Hall located at 70 Collier Street. What you might not know is that City Hall has undergone some pretty drastic changes over the decades and even a slight relocation!

Originally called Market Square, the area where Collier and Mulcaster Street meet was once used by the Simcoe Agricultural Society in the 1840’s to hold their annual fair and in 1854 the square was entrusted to the Barrie Town Council.

By 1856, council was being held in a brand-new building in Market Square designed by Toronto architect Joseph Sheard and built by local contractor Alexander Graham. This fabulous building (see below) originally had two floors with a third floor being added sometime later.

Sometime in the 1940s, City Hall would receive another makeover that would drastically alter its appearance before its eventual demolition in 1985. While it has changed locations once again, a reminder of its history can always be seen by the ever-present City Hall Monument you drive under on your way up Mulcaster Street, forever marking the location of Barrie’s old City Hall.

If you want to learn more about Glebe Block and all of Barrie’s history, head over to the Barrie Historical Archives, Barrie’s online museum. It’s full of pictures, videos, audio, and documents spanning nearly 200 years and it’s completely free!